You will often find me in the comfort of my twitching window. Most other folk would call it the Dining room window. But to me, in this new home of ours, it is the best view of the garden birds.

Just the one Blackbird. Whom I have become mildly obsessed with. I have been known to shush the Beard so I can listen to him sing. I keep vigil by the glass, in the hope that he shall come a little closer. I have been laying out treats for him. Like a good version of the witch from Hansel and Gretel.

That said, I do want to fatten him up, but not because I want to bake him in a pie of Four and Twenty. I just want him to stay because I love to listen to him. Who am I kidding? I want him to leap up on to my finger so I can play out that scene from Mary Poppins real time. But with an actual Blackbird. Not one masquerading as a Robin. 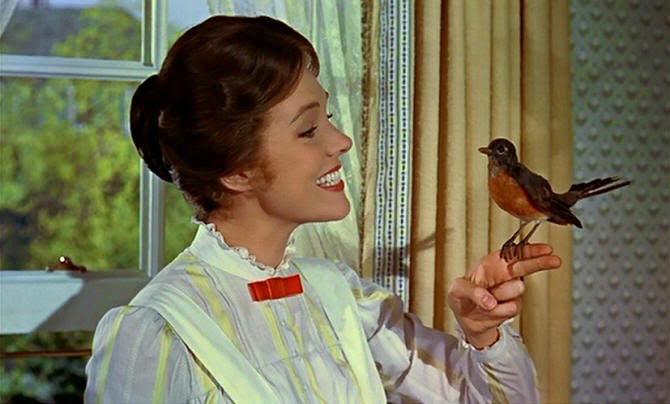 In recent days, I have been introduced to his Mrs who flutters in and rifles about. She reminds me of a stout housewife from the 1940s. A woman who has an endless queue to join, things to darn and a front step to scrub. If I could put a hat and handbag on her, I would. She seems disproving of her husbands choice. I imagine him fretting and trying to convince her:

Mr:"Look darling, look at the ivy, look how green!"

Mr: "But here, see, there are apples. And sometimes, mealworms"

Mrs: "They are also dry. And mealy"

Mrs: (raps claws on paving stone)"Are you quite finished? I have to get back to my step. It shan't clean itself.".

She left before I could capture her, but he stuck around looking forlornly at the soft apple I had put out that morning. Like a comic-strip character gazing lovingly at the pint he has had to leave behind on account of needing to get back home.

I don't know the conversation they had back at the roost, but she must have relented, for I have seen them both since on the daily. Nipping in and out of the ivy, chatting and chirruping to one another. Increasingly, there are squarks of alarm as a pesky feline is spotted or, worse, Starlings. Then Mr Blackbird is far from hen-pecked as he puffs himself up to defend his plot of dry ivy and mealworms.