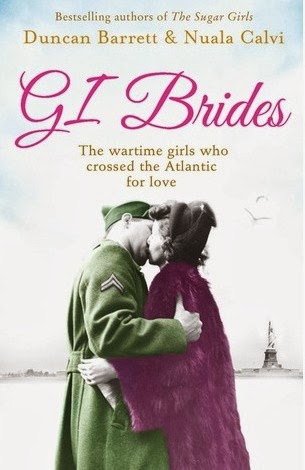 The ‘friendly invasion’ of Britain by over a million American G.I.s caused a sensation amongst a generation of young women deprived of male company during the Second World War. With their exotic accents, smart uniforms and aura of Hollywood glamour, the G.I.s soon had the local girls queuing up for a date, and the British boys off fighting abroad turning green with envy.
But American soldiers offered something even more tantalising than a ready supply of chocolate, chewing gum and nylon stockings. Becoming a G.I. bride provided an escape route from Blitz-ravaged Britain, an opportunity for a whole new life in America – a country that was more affluent, more modern and less class-ridden than home.

Some 70,000 G.I. brides crossed the Atlantic at the end of the war to join the men who had captured their hearts – but the long voyage was just the beginning of a much bigger journey.
Once there, the women would have to adapt to a foreign culture and a new way of life thousands of miles away from family and friends, with a man they hardly knew out of uniform. Some struggled with the isolation of life in rural America, or found their heroic soldier was less appealing once he returned to Civvy Street. But most persevered, determined to turn their wartime romance into a lifelong love affair, and prove to those back home that it really was possible to have a Hollywood ending.

Finally! A book has been read -  in full -  by my very own eyes! What's more -  it was a corker and I am here to tell you all about it. Although I was sent this book for review -  the opinions are mine.

A couple of years ago, I reviewed The Sugar Girls by the very same authors so I knew what to expect by way of style. Once more, following the lives of 4 women, I was taken on the journey of each. Touching on their war experiences but focusing mainly on how they met the American GI’s that were to become their husbands, the stories are heart wrenching and warming in equal measure.
I had not given much thought to the 70,000 War Brides who left the shores of Blightly for the USA, Canada and countries further afield and the personal battles they faced once they were there. I have often been swept along by a  love story, the excitement of the, sometimes, hasty marriage and the anxiety of awaiting the soldiers return. I had not really wondered much about what happened post 1945.
GI Brides explores a  fraction of the hardships endured by many, from long boat journeys to husbands not showing up to collect their wives in New York. The leaving behind of everything they knew to follow a love they believed to be so true, only to be met with a man who had been damaged by war or who had hidden his true personality during their courtship. Often with young children in tow, these young women were greeted not only by a media frenzy but also by strange food and customs. All this on top of meeting a family who often wanted to know why their son had not married a “good American girl”.

One of my favourite parts of the book was the Epilogue. Yes, yes, it is the ending, but after reading about their early lives, I loved learning about where they are now and getting a brief glimpse into their later years really made me smile.
Personally -  my only downside is the layout of the book. I would much prefer to read each story in full as opposed to a chapter on each. Despite having a photo of each lady on the back, I kept forgetting who was who and where I was with their story. However, if you are so inclined, I have just discovered that there is a way around this. Upon the wonderweb, you can purchase each story individually in an electronic format. And more to the point -  there is a bonus story for a mere 99p of another bride. It became the first thing I purchased to put on the e-reader I received for Christmas.
In conclusion, the strength of character needed to overcome all of these things and carve out a new life is to be saluted -  and read. Whether the marriage lasted until death they did part or ended in misery and divorce, GI Brides allows us to see how each woman coped in the face of each adversity.