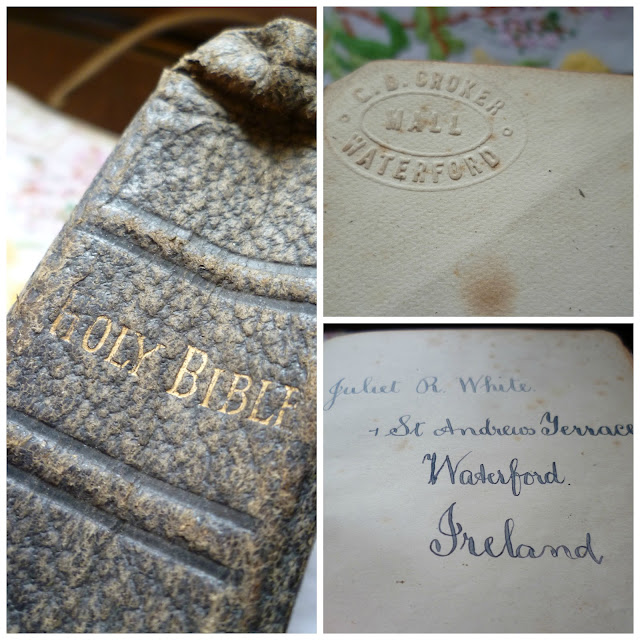 When I found this beauty at a carboot in the Summer, it kind of sang out to me. 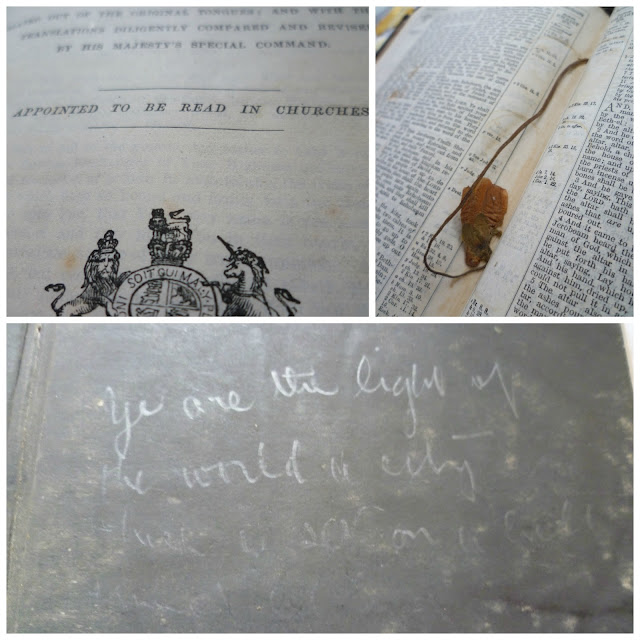 On a stall consisting of 3 painting tables covered in, mostly, dubious looking electronic goods, a couple of books peaked out from beneath the modernity. I think the sun may have come out from behind a cloud especially for them and hit them just so, to catch my eye.

I may be exaggerating. 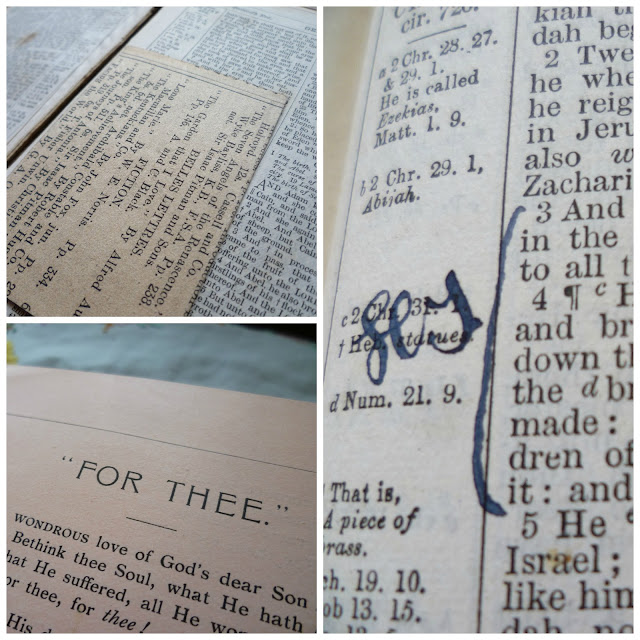 But there was a definite pull. So I sauntered over and entered into conversation with the Gent-of-Many-Radios. He told me the bible was old and that he didn't know where it came from. Had he looked inside, he might have seen, but, meh. I knew once I picked it up, it had to be mine and all I needed to know was the price.

I handed over my twenty 20p's -  he was not amused - and walked away clutching it to my chest. 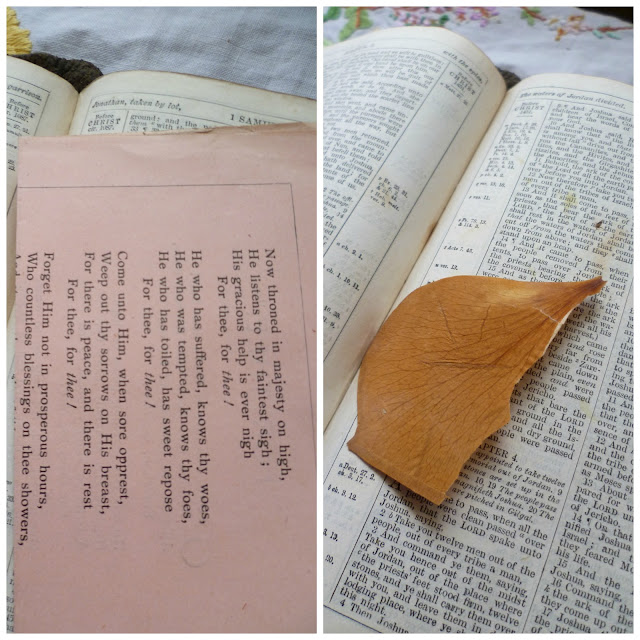 It was only when I got home, having told The Beard I had bought "another old Bible" when I found him half way across the thrifting field, that I could have a proper good old look at my new religious treasure.

And what treasure it was. I felt like I had bought someone's whole life for the price of a pint and a packet of crisps. And I felt blessed.

Stuffed, shoved, snuggled and stowed inside were not only dried flowers but pamphlets from 1914-1918, Easter sermons and notes in the margins.

Hand-written notes by the owner.

Who's neighbourhood I have since walked around on Google Earth. Natch. 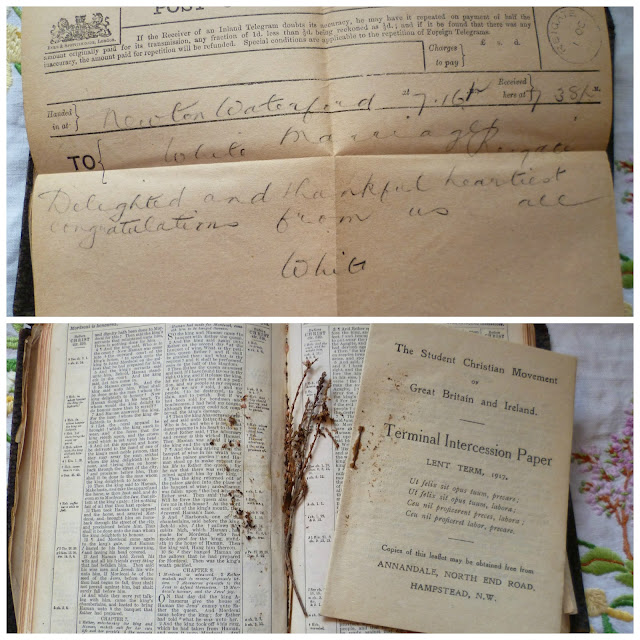 As I crept through each page, a whole pot of tea went cold. I think the sun may have even set by the time I came through the other side. I could not believe that I was now the guardian of this book that, like my Antique Bible , had once meant so much to someone. 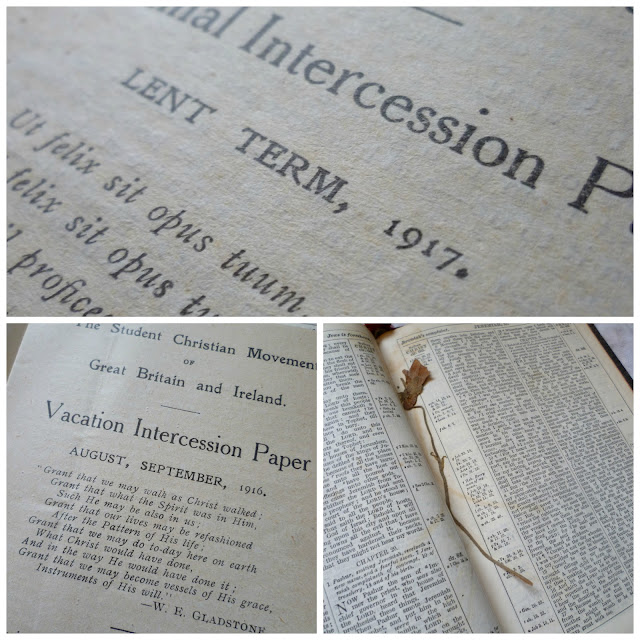 I conjured up and image in my mind of this woman, attending church every Sunday and with extra vigor on the Holy and Feast days. Someone who's faith was true and nourishing.

Someone who thought it prudent to place flowers in the pages. Had she picked them herself, in an idol fashion whilst daydreaming home from the service, or had they been given to her by a suitor? Perhaps who walked her back from church to her parents homestead or rented lodgings with a peck on the cheek and a tip of his hat? 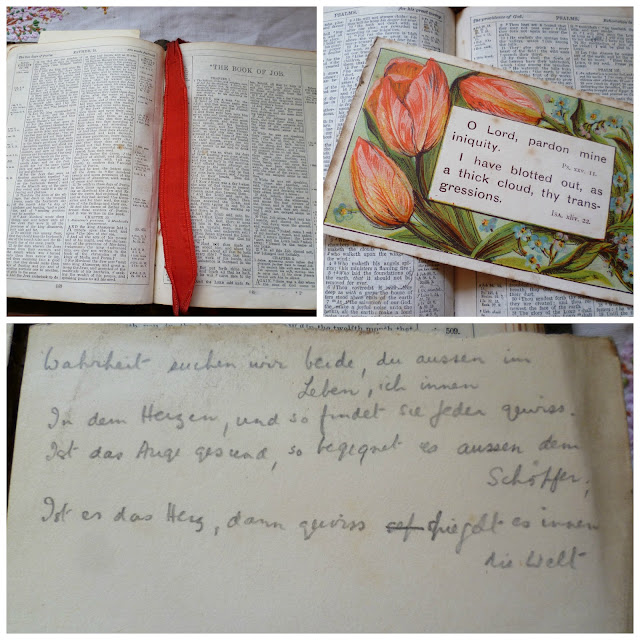 Why was there German translations written in on a scrap of paper and placed inside? Could she has been a VAD Nurse and went to the front? Fanciful, I know. But, maybe...

Was she a student studying in England? Was she affected by the events in Ireland around 1916 when the I.R.A was beginning to form? 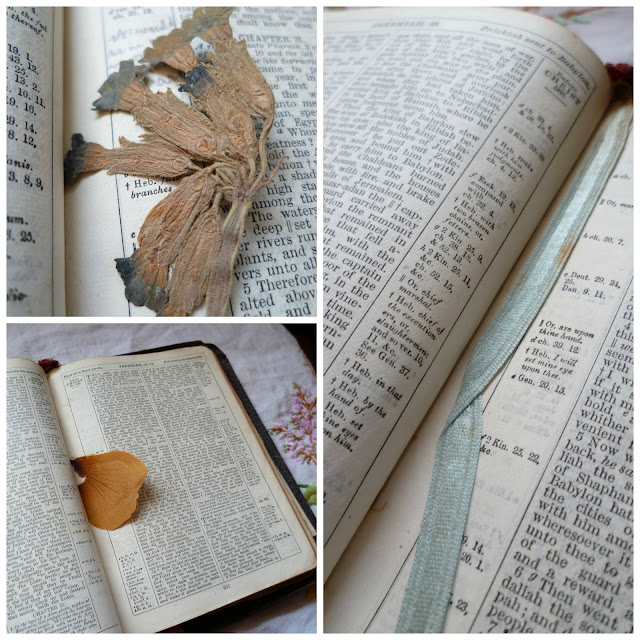 The thought of never knowing who she was, what she became and how she spent her life began to take over my own.

This is the downfall of collecting old things. You have to accept that there may be questions that remain unanswered. 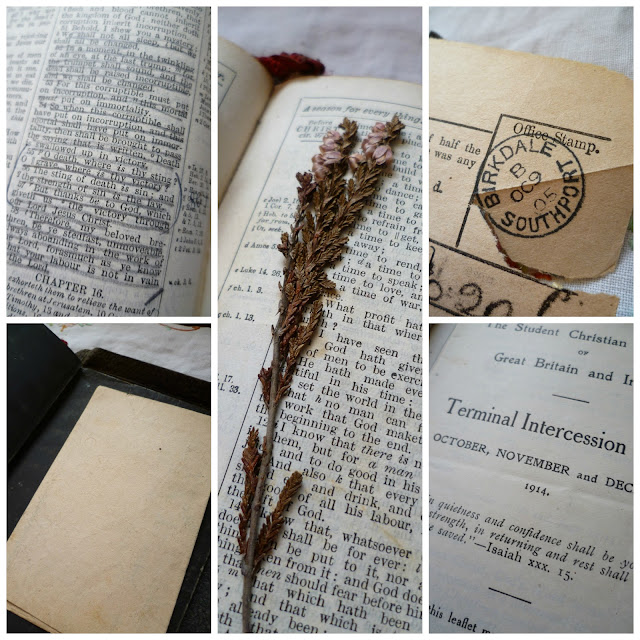 The only thing I could know for sure is how much this item had once meant to Juliet. She had placed important, memorable flora and fauna inside. She had written the 10 commandments in the back -  and oh! what a pleasure to see her hand writing. She had copied out the parts that possibly gave her strength. 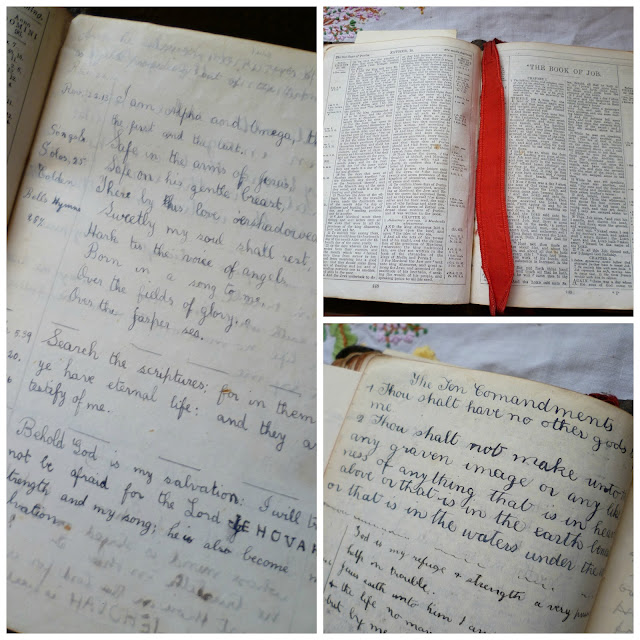 But, the most illusive question of all, is that you may never know what the former owner looked like. You may never be able to put a face to an object. And there is something about that which I truly love. You can make up it's history. You can ponder it but you may never get the information you seek.

There have been others of you out there that have bought an old item, a hand bag or a dress, with an old ticket stub still in the pocket or an earring concealed within the middle compartment. Or maybe an old shopping list. I have yet to find one myself, but I hold out hope.

But a photo? They are pretty rare.

Except inside this thrifted find. 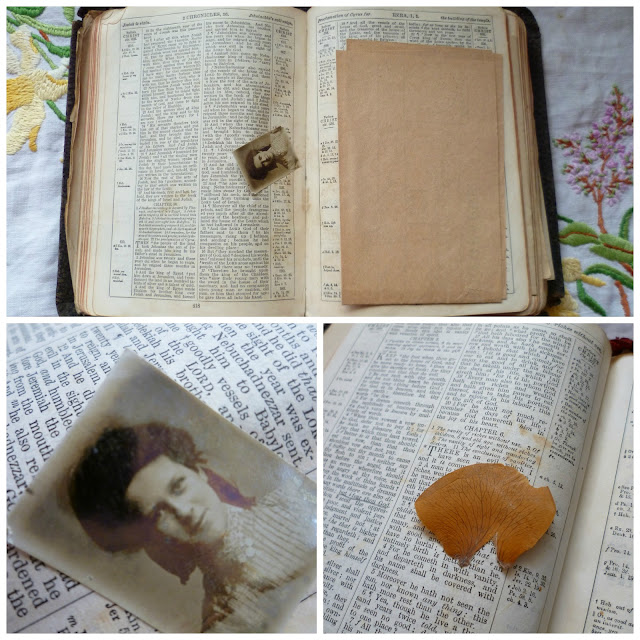 Is this Juliet? Is this the face behind the collection of items, the flowers, the telegram, the handwriting?

And it has made me want to know about her even more.