Whilst sorting through my folder of photos, I have come across some bits and bobs that I intended to share with y'all at the time -  and then promptly forgot. Case in point -  my recent engagement announcement -  4 months after the event.

This post is about something that happened in 2011. I know.
What am I like? (a forgetful moo, that's what) 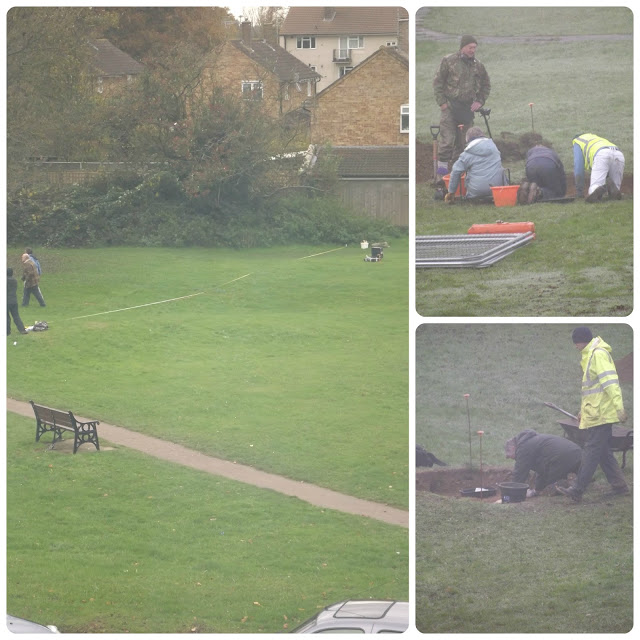 If you had not noticed, I do like me some history. I am usually more of a up-close-and-touching kind of person and I shall be quite frank: archaeology does not really do it for me. I like looking at the physical building and not really it's long lost foundations.That was until a dig took place on my doorstep. Quite literally.

I live in an area that until about 60 years ago, was all fields. From my window I can see an area known locally as Rabbit Dell. It is a nice little patch of green with a dip. In the wet seasons (so, that's all year round then in the UK) it can become a little pond. When we park as night and our headlights skim across the grass, we can see all the lumps and ridges in the earth.

Over the past 6 years of living here, I have not once thought about what they might be caused by. 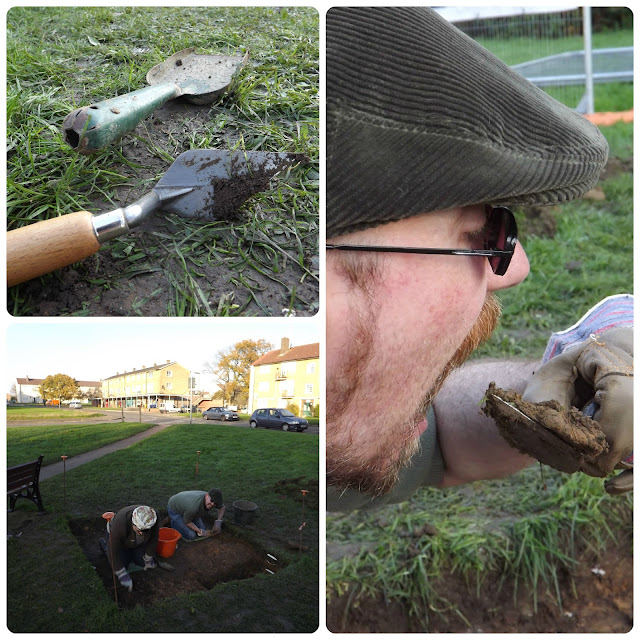 Until a little leaflet plopped through my letter box back in September 2011. Advising me that there was to be a dig on that there green grass. Beyond the diatribe of decades (the area was once used as a rubbish tip -  nice) the foundations of a 12th Century Manor House known as Preston Hawe would be found.

Just before the surrounding area was developed, a chap called Brian Hope-Taylor had excavated the site and found a whole heap of stuff. Like, a whole load. But, had failed to document much of his findings that made any sense. Details scribbed on paper bags or the back of shopping lists, artifacts pretty much unlabeled.

A total nightmare to sort through and one that took a lot of dedication from those involved. 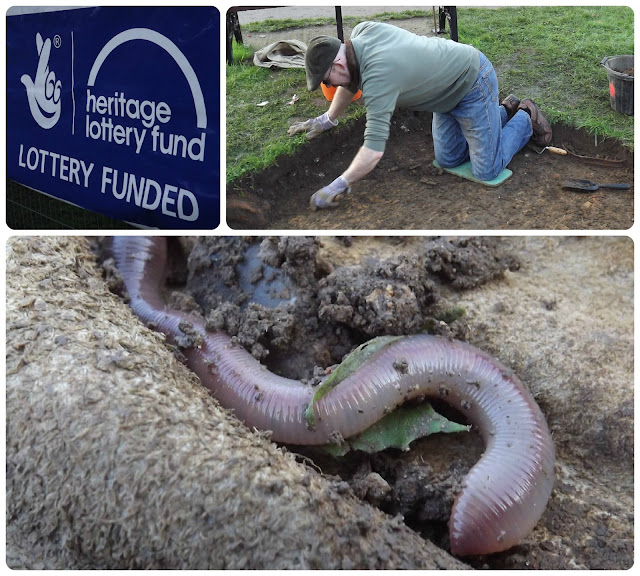 So, when the dig was opened up to the public, with a view to finding the walls of the Chapel, The Beard and I jumped at the chance. How could we not? It was no more than a 30 second walk from our front door. And who knew what we might find?

Mud, rocks and worms. That is all I found. And that damp mud will give you damp knees, mud is not as much fun as I remember from my childhood and that scraping mud is a thankless task. Hats off to folk that have more than a passing interest in this work.

Then again, if I owned something more waterproof than jeggings, I would not have suffered wet knees. Or, in fact, if I had kept to the kneel-board provided. 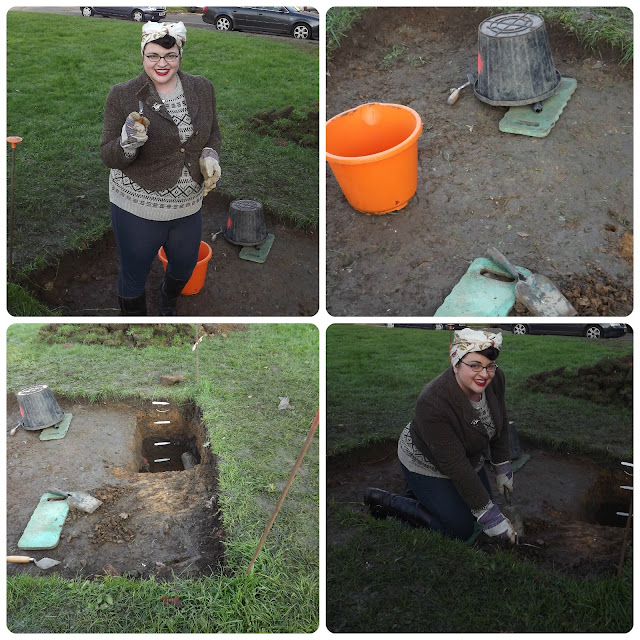 But, just to be a part of it was worth all the kneel-ache. That and the abundance of worms I met along the way. I am a worm rescuer. If I see them on the path, where they have been dropped by the early bird, I have to pick them up and chuck them on the grass in the hope that they make it underground before the beaked ones return. I find dried out worms on the pavement most distressing. Thankfully I did not cut any in half with my trowel.

Not long after the dig was complete, the community was invited to an open weekend to explore the items that had been found back in 1952 and also during the present day dig. 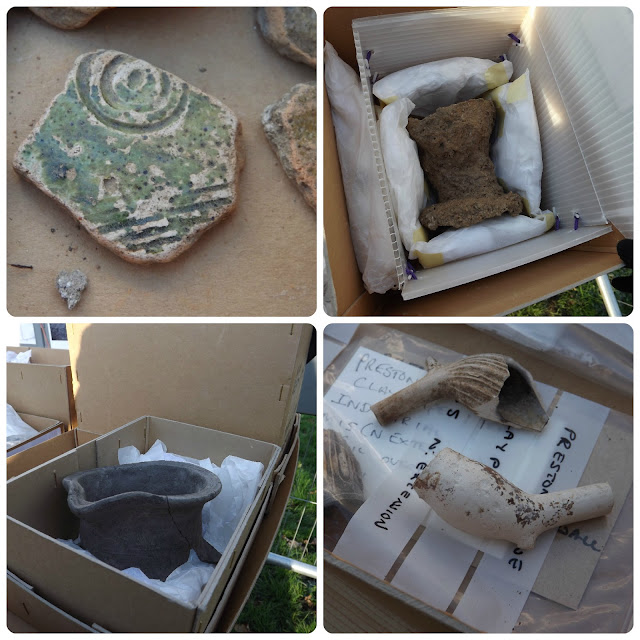 There were all sorts, including medieval tiles, glazed pottery, a metal chalice and ceramic pipes. I was actually able to hold the chalice which made me feel a bit spesh.

I also liked looking at the more modern day finds that came from the green being used as a former dumping ground. Bike tires, milk bottles, old coke cans, vinyl and a number plate from the 1980's.

A young boy and his Dad even found a piece of Victorian masonry. 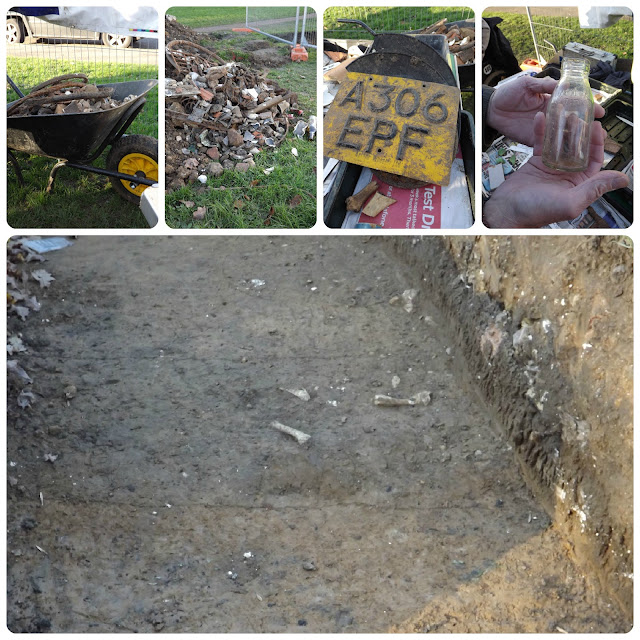 Interestingly, Brian Hope-Taylor had also uncovered some human remains which have been left in situ then as now. There is speculation as to who might have been buried there, but I quite like the fact that they have been left where they lay. There would have once been up to five buildings in and around the area where wealthy families lived, loved and died. It is nice to think that a little something of them remains. 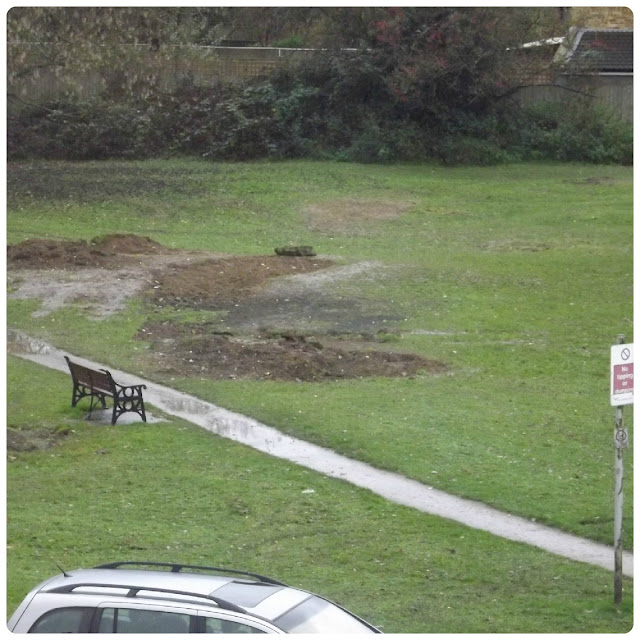 And now? Well now it is all back under the mud. The 7 trenches that were opened have been closed, covered and a whole lotta grass seed chucked on them last Spring to blend the disturbance back into the landscape.

Rabbit Dell still fills with water and the lumps and bumps still catch in our headlights. But now I cannot help but think about who lived in this area, what they experienced and how I took part in finding out a little more about them.