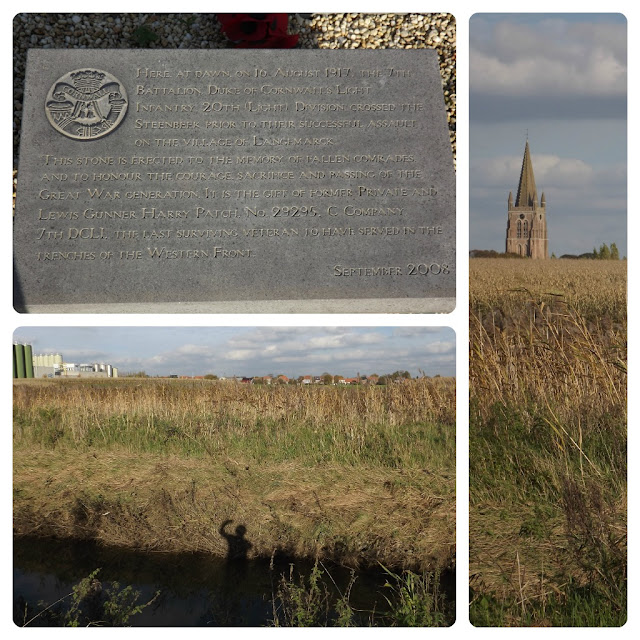 Continuing from my first post last month, I have more to show you from my weekend in Ypres and the surrounding areas. We did so much in just a couple of days that I thought I would stagger the posts a little.

So, after the sombre Trenches of Death, we began to make our way to Ypres. Via a small memorial plaque and a brown, flat field.

We pulled off the road for what I thought was just a pit stop. A couple of sarnies, some flask-infused tepid tea and a stretch. What I did not realise is that the place we had pulled up to had been graced by the presence of Harry Patch.

As the numbers of WW1 veterans were whittled down by time, the remaining men came under a lot of public interest in the latter years of their life. Where had they fought? What had they seen? Were there really rats the size of cats in the trenches?  Until this point, many had simply got on with their lives and not really spoken about their experiences and Harry Patch was no different.  That is until he was interviewed for the book The Last Fighting Tommy.

So -  to be in a place where I knew he had stood -  and jumped over -  all those years ago, as well as returning to unveil a plaque to his comrades in 2008, left me chewing on my sandwiches a little thoughtfully. 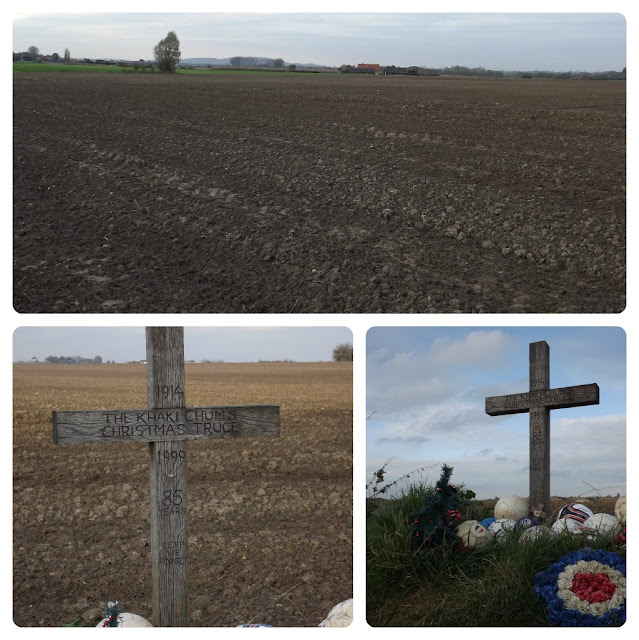 The next journey halt was to view a damp, claggy farmers field. An incredibly flat one. Which does not look particularly special - apart from it's size and said flatness. That is until you spy the unofficial marker, the wreathes, the odd Christmas tree and the abundance of footballs.

It is here, on Christmas Eve 1914, that the now legendary Christmas Truce occurred. An unofficial truce between the Enemy and the Allies. A ceasefire that, at first, was agreed for each army to enter No Man's Land, retrieve and bury their dead.

However, conversations were struck, carols were sung, cigarettes were shared, rations and booze were passed around and on Christmas Day, a football match was played on this very field. On some stretches of the Western Front, the truce lasted but a few hours. In others, it stayed in place until the New Year.

It may just be a field. A field up a steep bank and full of nothing but mud in winter and crops in summer. But there is most certainly something about it that I still cannot quite put my finger on.

Something peaceful and jostling. Something that made me smile and wonder what would have happened if the truce had never ended and everyone had just gone home.