Madonna presents a passionate tale of the search for love and the meaning of happiness in W.E., a rich portrayal of two strong women resolved to find romance.Caught in a loveless Manhattan marriage, abused and frustrated Wally (Abbie Cornish - Limitless, Bright Star) obsesses over Wallis Simpson (Andrea Riseborough - Brighton Rock, Made in Dagenham), the stylish American divorcee who captured the heart of Edward VIII (James D'Arcy) who abdicated the throne as King of England. As the Duchess of Windsor, Wallis spends the rest of her life in the glare of celebrity exile. Inspired by the Duchess' determination to pursue love in the face of social exile, Wally escapes into the arms of another man (Oscar Isaac - Drive) whose love sets her free.

I will admit that I was very excited when the press releases came out for this film over a year ago. I  am new to the story of Wallis Simpson. No, not the image of a vilified harpie who ruined the Royal Family and, if you believe the opinion of The Queen Mother, lead to the early death of her beloved husband, Bertie.

The actual story. So, I was hopeful when sitting down to watch events unfold on screen. I knew that  it had received tepid reviews when it came out, but I like to make up my own mind.

Flitting between 1998 and the 1930's, with a quick glimpse at the 20's and the 70's, the movie skips back and forth, with the modern day character, "Wally" -  named after the lady herself - living her own life, whilst uncovering "memories" of Mrs Simpson's life through a series of objects that are coming up for auction.

There are comparrisons drawn between the two women and the lives they are living, and at times they speak to one another.

That may all sound a bit odd -  but I do understand the feeling director,Madonna, was trying to create. But for me it fell a little flat.

Although I liked the way in which Wallis Simpson's story is portrayed -  with a flawless performance from Andrea Riseborough, I wish that more time had been spent focussing on Wallis and had left Wally on the cutting room floor. 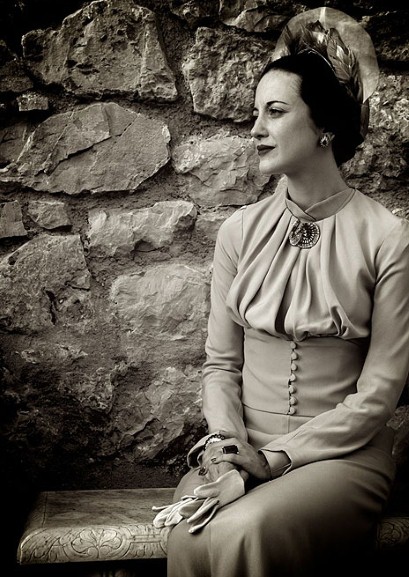 I just failed to connect with "Wally", her dying relationship with her husband and her interest in Mrs Simpson. I drifted off when she was on screen, despite Abbie Cornish giving her all. It was not the actor -  it was the lines. I just didn't see the point.

Which is a shame, as I am not doubting that there was huge passion for the subject not to mention a decent budget and talented actors.

The costume is amazing. I shall give it that. As is the believabilty of Riseborough in such a famous woman's very fashionable shoes. The acting ability of this woman know's no bounds. She really takes on a character and brings them to life. For me, anywho.

I guess I am left feeling that this was a huge opportunity missed to actually tell the story of Wallis Simpson -  in all its scandalous, stylish and saddening glory.

That said, it has made me want to know more about Wallis Simpson. Why I have not been drawn to her before is beyond my own comprehension.

Then again, I now have it all to look forward to.