Once a Land Girl by Angela Huth ~ Review 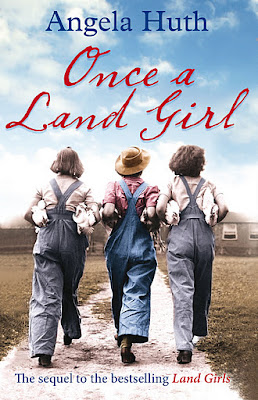 Disasters, disappointments, dashed hopes ... Doesn't seem that easy, just to find a good man, love him and be loved back. But I shan't give up trying. The war is over, but life goes on for Land Girls Prue, Stella and Ag. While two of the girls are married, Prue, the incorrigible flirt, has no one and is engaged in a quest for a man to provide her with security and gold taps. A year after the girls leave Hallows Farm, Prue finds just such a man and a marriage that protects her from the hardships of post-war Manchester. But she still hankers for the life she so loved as a Land Girl, though it's hard to get work on the sort of farm that provided unimaginable happiness during the war. The lives of her two old friends, Stella and Ag, have moved on and neither visit her. Additionally Prue finds that her newly wedded state and fresh horizons fail to supply the answers she seeks. Yet, in the puzzling world beyond the fields, Prue, in her indomitable way, open as ever to each chance encounter, remains buoyant, optimistic and quite sure that the life she imagines is just round yet another corner.


I had by passed this book on many occasions in various charity shops, because I thought it was just a different title for the authors original book The Land Girls. I realise now that I am an idiot -  but perhaps I was being guided to ignore it on those shelves for a good reason.

Focusing on my favourite character, Prue, from the original novel, and her life after the war, I really loved this book at first. Everything was a bit glum and a bit desolate, but Prue and her hair bows were trying to make the best of it. I thought that this was a fairly accurate portrayal of how a lot of women who has been in service felt after WW2 -  "Well -  what do we do now?"

The other Land Girls, Ag and Stella have gone off and are living their lives, but Prue seems to be waiting to start hers. It is this journey that we follow her on.

And I wish I had not bothered. This book became a bit of a mill stone for me. I felt I had to finish it, out of loyalty to the original and my love of Prue. But, I feel that it was badly written, almost churned out by the author, possibly on account of the first one being such a success. Prue jumps from one lover to the next. It seems as though there is too much drama crammed into each chapter, and fairly rubbish drama at that. When in doubt of something more constructive to say -  Prue says "Cripes". A lot. Which bugged the beejesus out of me in the end and resulted in my launching the book behind the sofa - 2 chapters from the finish line.

Although this gets ok-ish reviews on various on line sites -  my opinion is to avoid. I have had to ward off it's potential to tarnish the original book for me and shall pretend to myself that I did, in fact, leave it on the charity shop bookshelf.

Whereas I feel The Land Girls crosses over so that any one can read it, I feel like this one has been written very much for a little old lady audience.