All Muck, No Medals by Joan Mant ~ review 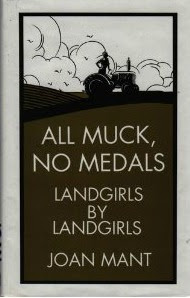 I do like a good book about my favourite service women from World War II -  and this book delivers it in spades (along side hoes, tractors, milk pales & rat catching)

I have read a lot of first hand accounts of the Womens Land Army (WLA) over the past few of years. Some of these have been written by family members after an elderly mother or grandmother has dictated her memories and published independantly. They are a joy to read and there are some coming up for review.

But this book has grabbed a whole load of these memories in the 1990's and handily put them all in one place. Well done that author -  who was also a Land Girl.

The book is interspursed with memories of the author and the countless former Land Girls who replied to an advert Joan Mant placed.

All angles are covered, from why these young women decided to join the WLA -  with reasons ranging from "I liked the thought of the outdoors" to "The WRENS were not recruiting", training, pay, animal woes, aching limbs and laughing their way through the agony of being away from home for the first time.

I feel that I really learnt a lot from this anthology including anger inducing recollections of Land Girls being made to work in desperate weather whilst conscientious objectors and POW's were sent back to base, the WLA not being recognised as a service uniform and so use of subsidised NAFFI vans became unreachable and pay being heavily docked by farmers until complaints were made and the young woman moved on.

There is also tales of real camaraderie, dances and tinned peaches with American & Canadian soldiers and feeding orphaned lambs by bottle in front of the kitchen fire.

I think that this is a book that I shall refer back to time and again. In 2009 it was republished under the title of "All Muck, Now Medals" after the long awaited introduction of service medals for former WLA members in 2007.

For me, this is a definitive collection of memories of the so very often Forgotten Army.