Ooooooh weeee! Have I got a whole heap to share with you today.

Recently I was invited by writer Akeela to to attend a very special trip.

When I received the email, I kept re-reading it, such was my disbelief.

Along with Margaret, Claire and Gemma, Akeela and I were off for a day out of epic proportions.

On none other that The Orient Express British Pullman.

This shall be pic heavy - but they are of some right nice stuff -  so enjoy! 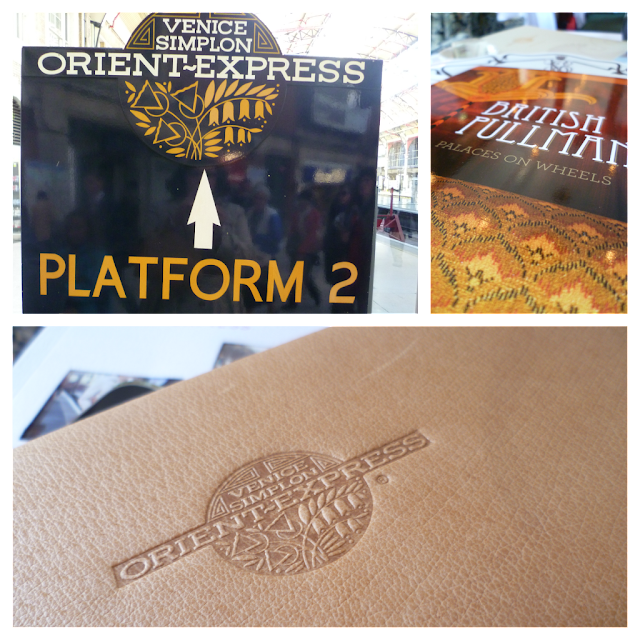 It was an early start of heading off to London Victoria to board this magnificent steam train. I was bleary eyed, but beyond excited. Even on the day of the event, I could not believe it.

We checked in and were given our boarding passes. In a leather wallet. Which is mine to keep forever more.  It made me feel like a traveller from a bygone era. And like I should have been wearing gloves, a big hat and asking Jeeves to take care of the my luggage and the Afgan hound. 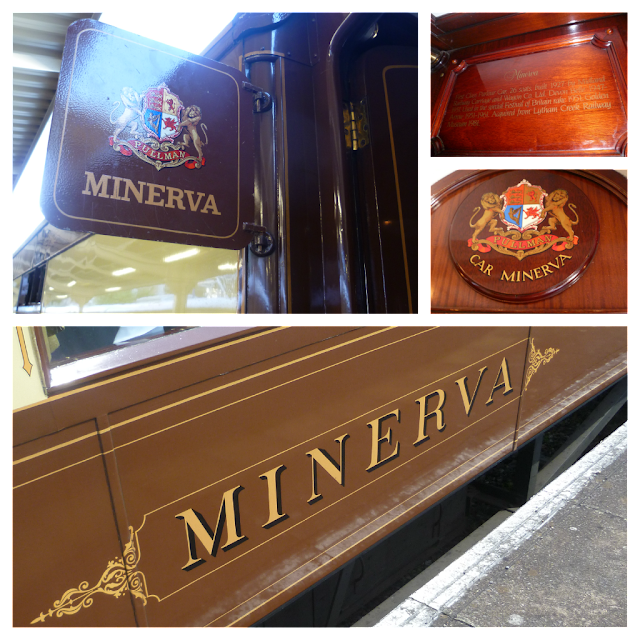 We were seated in coach Minerva -  a 1927 original that was used as part of a very special passenger service in 1951 for the Festival of Britain. She then went on to form part The Devon Belle and later, The Golden Arrow.

Each carriage has it's own name, a touch I loved, and it's own history. 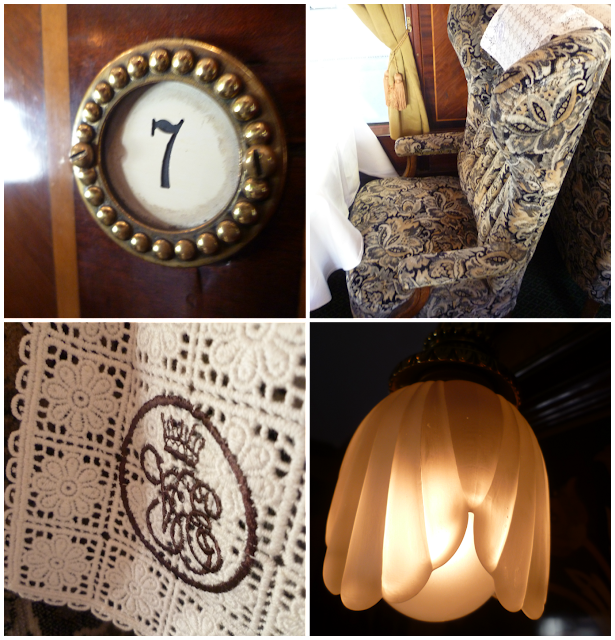 And, oh my, so beautifully decorated. I am not too sure what I was expecting, but individual, uphosltered armchairs was not on my list. Nor were monogrammed seat covers. Or spherical seat numbers. And all this before I had even sat down. 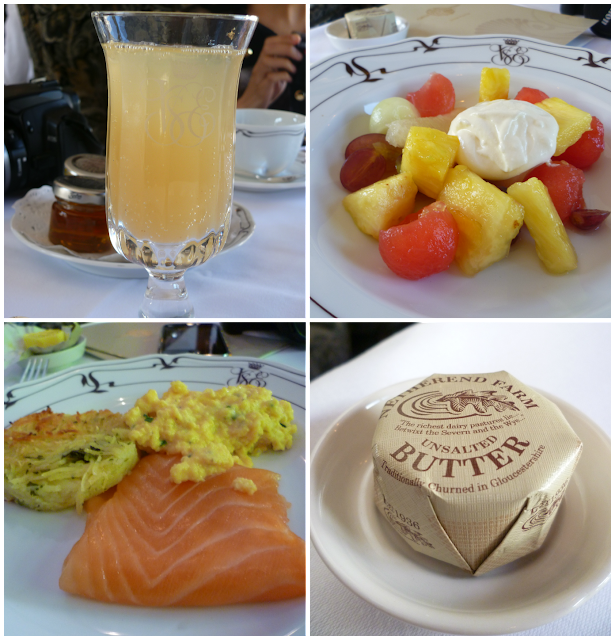 We were all so in awe of our surroundings, I am not too sure a Peach Bellini was the right thing for me to quaffing at 9am, because it only made the butterflies that were hurling around my tummy, worse. I was very pleased when something to munch on arrived, in the shape of fresh fruit salad, smoked salmon, scrambled egg, potato rosti and fresh warm rolls. And a whole truckle of butter. 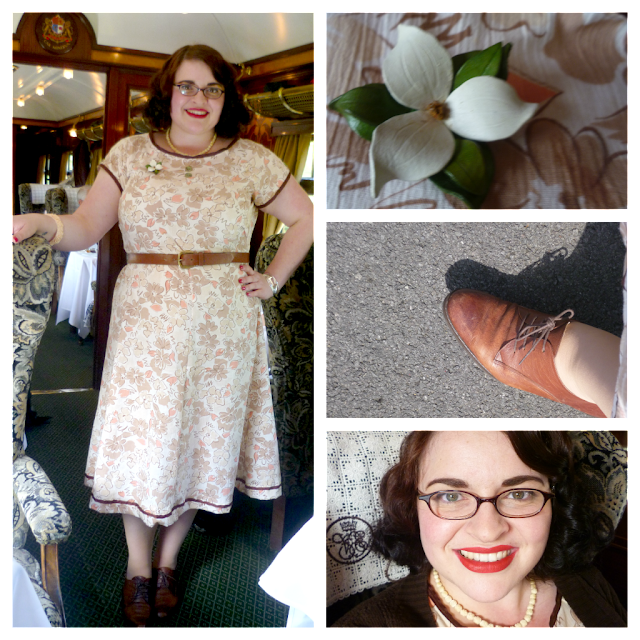 We soon became accustomed to the jiggery of the train and decided to grab some outfit shots. I made a new dress especially for the trip. It is from the same pattern as here and here, and again from thrifted fabric and embellishments. And I have to say, it is the frock I am most proud of. Proof that practice pays off!

Claire, Gemma and I decided to head off down the train to investigate the other carriages. We had heard a rumour that all of them are individually decorated and we wanted to know what other people had in theirs.

Each carriage on the British Pullman is furnished to such a high standard that I became awe-struck all over again. 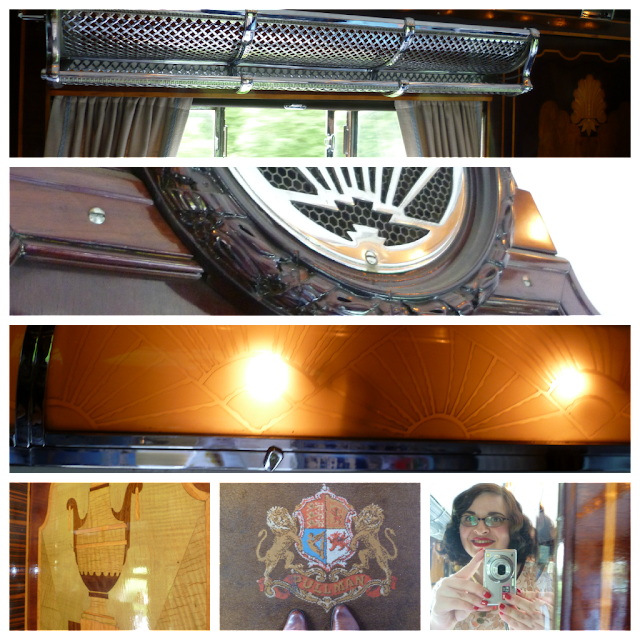 The sun was blazing (which was a treat as it seems to have been raining in the UK since the year dot) and the train slowed to a stop. This was so the engine could be watered and a huge plume of steam expelled. And for us all to get off, pose and gawp at said steam. 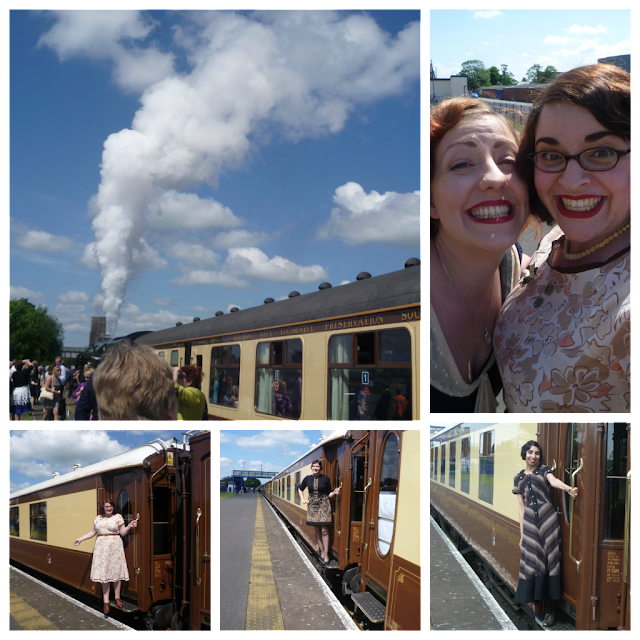 More exploring was to be had, so we headed off to the kitchen to meet the Chef who was expertly preparing delicate canopes, whilst maintaining his balance and not shoving a thumb into the food artwork he was making. The man had skills. 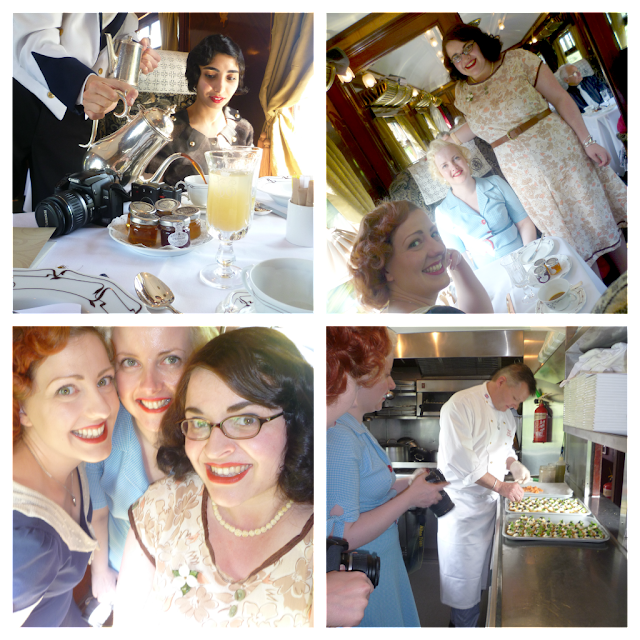 The staff were just the right amount of professional, polite and friendly. There was plenty of courtesy and "Madames" whilst they poured tea and, later on, piping hot soup on a wiggly moving train -  all without spilling a drop. But, I found that you could also have a bit of a laugh with them.

They were very interested by and impressed with the fact that we had "dressed up" for the occasion. And despite one passenger trying to convince us that we do not, you-just-can't- nope-I-don't-believe-you style ourselves like this full time, the interest we generated was of a comfortable level.

So much so, that the Train Captain gave is a bottle of Champagne to share on the return journey *blush*

After reaching our destinaton of Bristol Temple Meads station, and heading off for a whistle stop tour of the ss Great Britain (more on that in a separate, special post all of it's very own) we were back aboard and homeward bound. 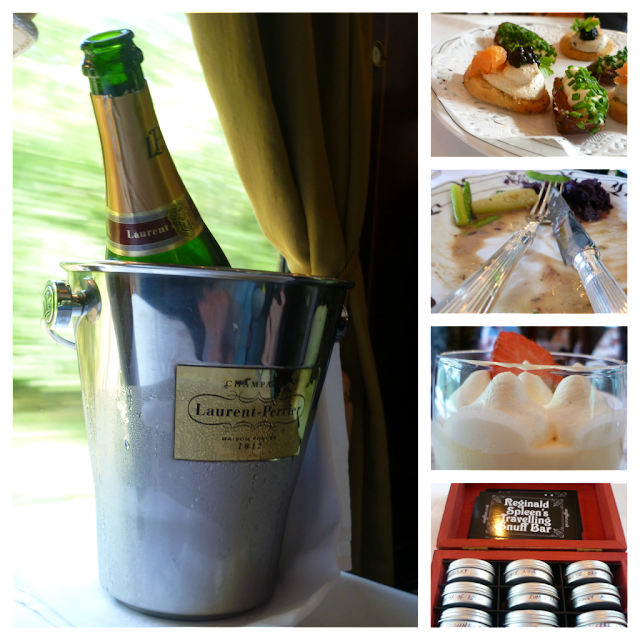 Dinner of Aspargus & Leek soup, pork tenderloin & mash, cheese & crackers and the most divine Strawberry & Elderflower trifle were all washed down with wine, champagne and tea. And then some snuff thanks to Gemma and Reginald Spleen's Travelling Snuff Bar.

I had to peg it across Victoria station to catch my train home, which left me feeling like I had ended the day rather too soon. But, the memory (which still feels a bit like a dream) shall stay with me for life. 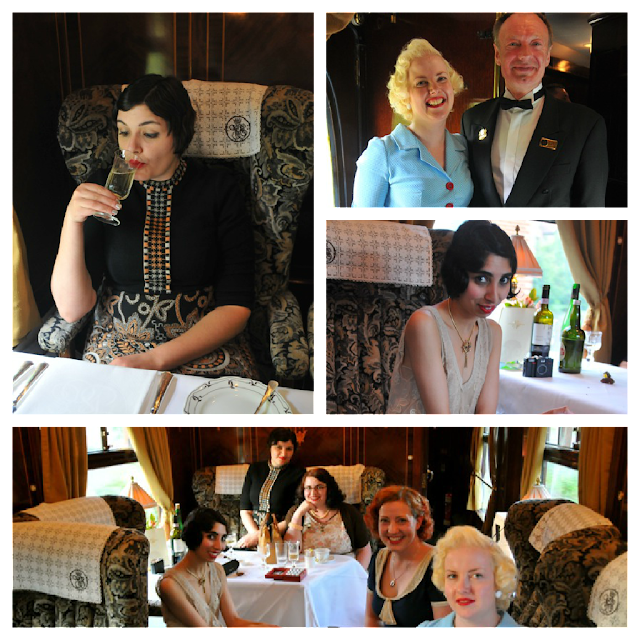 Should you be interested in a day out on this wonderful service for your very self, you can find all details here.


There really is very little as evocative as the noise of a steam train. From the white clouds spilling out of the chimney, to the sound of the clickety-clack along the tracks.

Team that with the incredible interiors and first class service and it really was the perfect day out.