Well , here be Day Four which has (finally) landed and is so heavy it has been cleft in two from the sheer weight.

You will notice that this post is another dual post, as we did so much. I am tired, just thinking about it!

But  -  boy oh boy  - was it interesting, eye opening, sad and humbling. 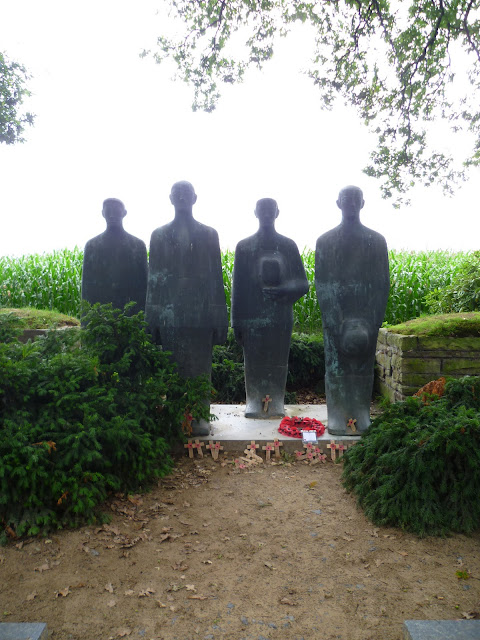 After a massive breakfast amongst more screaming continental children than you could shake a stick at, a woman who paid more attention to her poodle than her husband and delicious Rosehip tea (which I might have pilfered some sachets of to bring home... *whistles*) we started the day at Langemark German Cemetery. 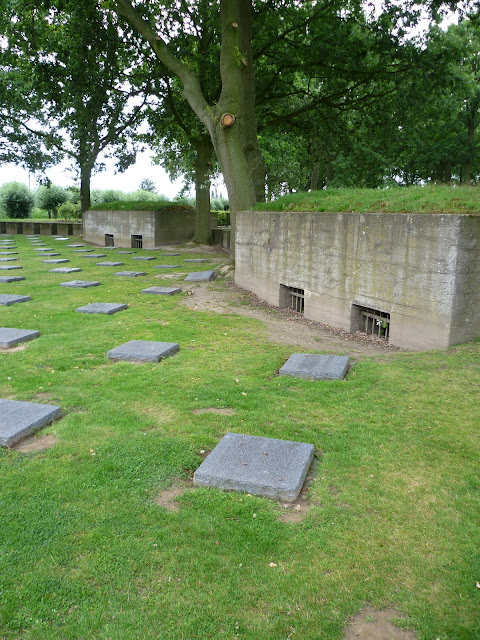 It is a silent, peaceful - with a dash of eerie -  place. Planted with row after row of Oak trees, there is an abundance of acorns. The grass appears lush and green. But, on both visits, I did not see one bird. Or squirrel.

I feel that the sad truth of it is, so much lime was placed over the bodies, or the remains of, that there is not a lot of worms etc to be had, so there is a general lack of wildlife within this memorial. Perhaps? 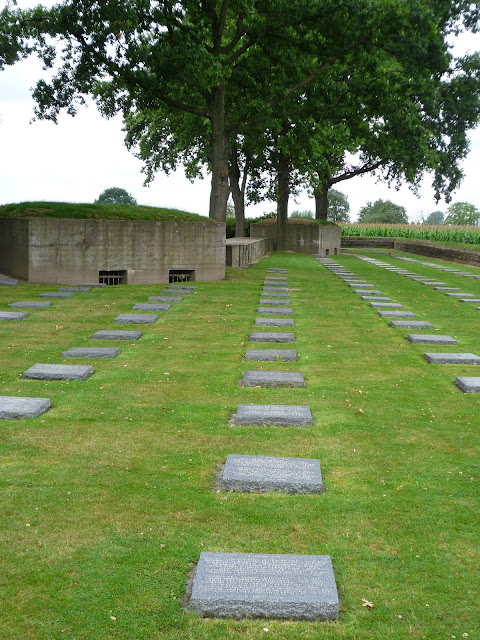 The contrast between this cemetery and any of the Commonwealth ones is stark. 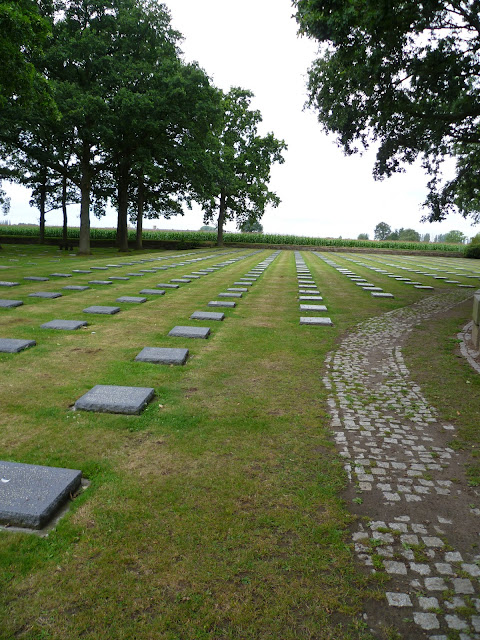 For one, all the stones are grey granite and they are laying down.

And all the stones represent more than one person.

This shocked and saddened me a great deal when I was first there. And no less on my second visit. I looked into it when I got home, and the very frank and basic answer as to why is that the Belgians, at the time, felt the need to give no more land to "The Hun" than absolutely necessary. 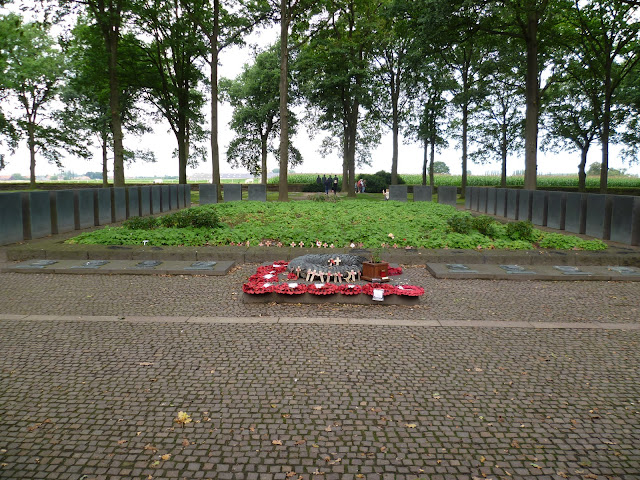 They felt it right to give more land to the defenders of the country as opposed to it's attackers. I understand the ethos behind that at the time.

But when that is compounded by how many men have been lain to rest at Langemark, it makes my head spin.

In the "garden" above, surrounded by vast, strong, iron engraved memorials there are approximately 25,000 soldiers, airmen, medics and sailors. All brought from various other temporary cemeteries to a final resting place. 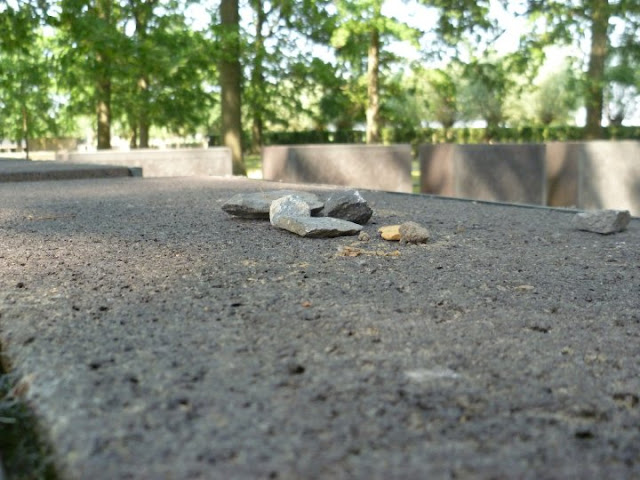 And it was here that I encountered pebbles on top of some of the flat stones and memorials. The Jewish symbol of remembrance. This humbled me in a huge way. It made me think about all the people who had fought and died for Germany -  only for Jewish veterans and their families to persecuted by the Nazi's 20 years later.

With a full head and a heavy heart, from here we travelled to Tyne Cot memorial.

And here you shall see the difference I am talking about. 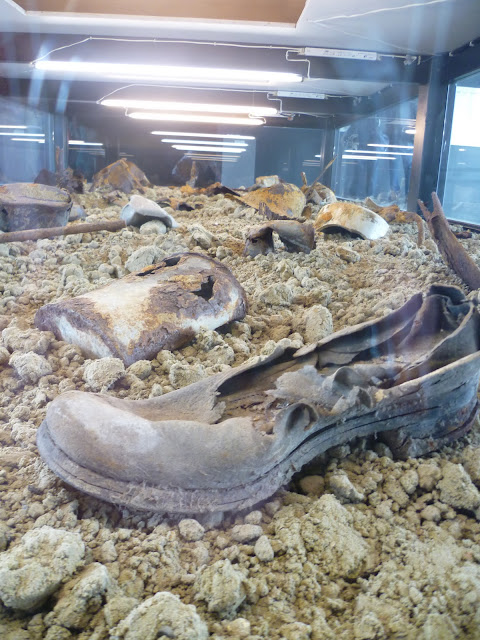 The Tyne Cot Memorial has, of recent years, developed a brief, but poignant visitors centre. As you approach, along a pathway, you hear a voice. A voice that is reading out names. 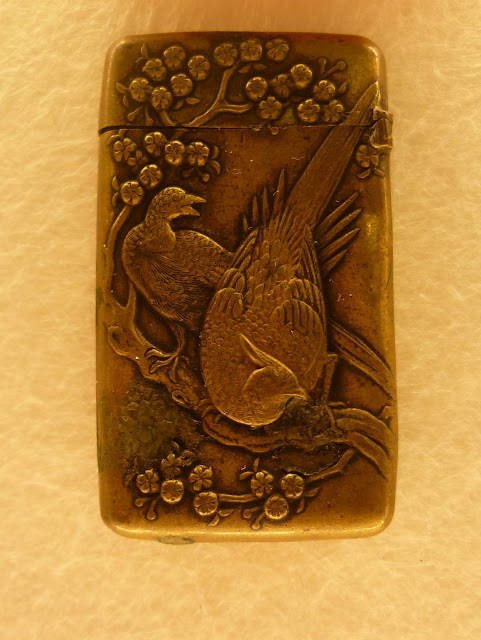 Names of soldiers who lost their lives defending the locality. In many cases, the disembodied voice tells the listener that solider of whom she speaks is "missing". She says this quite a lot. 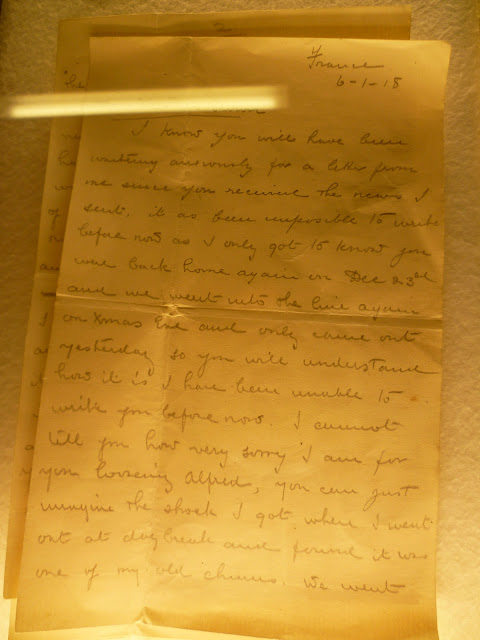 The visitors centre is, for me, a compact, but not overwhelming exhibition of artefact's. Letters, photographs, boots -  which always make me the saddest, as it would have been on somebodies foot - a lighter, a mess tin.

The centre has a clean, but personal approach.

You are welcome to stay there for as long as you wish to read and absorb. 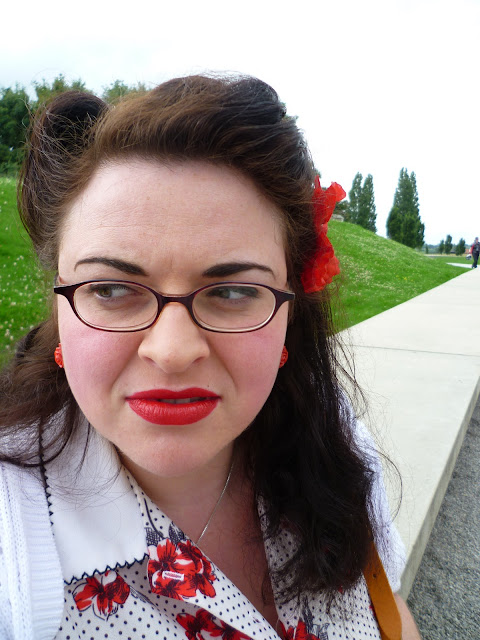 When you think that Tyne Cot is the largest Commonwealth War Cemetery in the world, from any conflict, it is a lot to absorb. Near on 12,000 men are buried here. And that it just those with graves.

So, someone like me, sits and has a quick smoke. 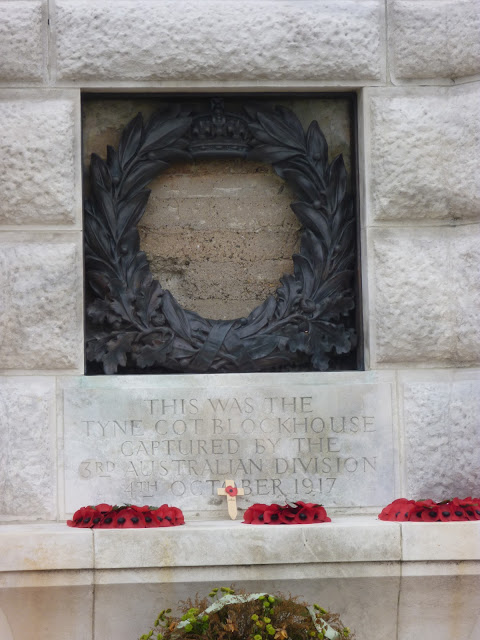 Here are buried British, Australian, New Zealand and Canadian soldiers.  It is so peaceful and tranquil it is, even for me, hard to imagine the scene. 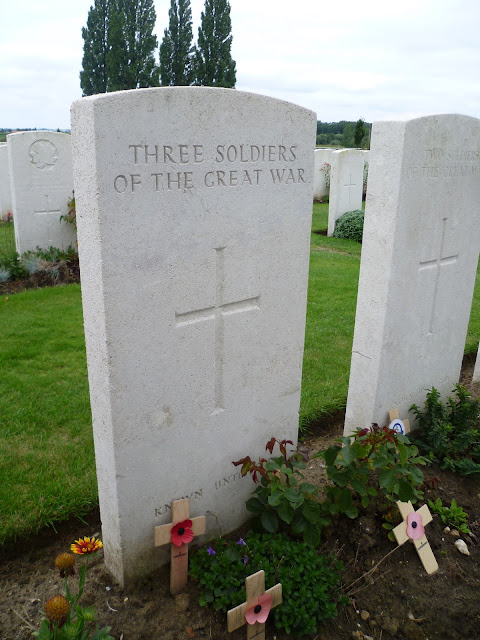 There is a vast memorial to The Missing. With it's curved and seemingly endless walls. Of names. 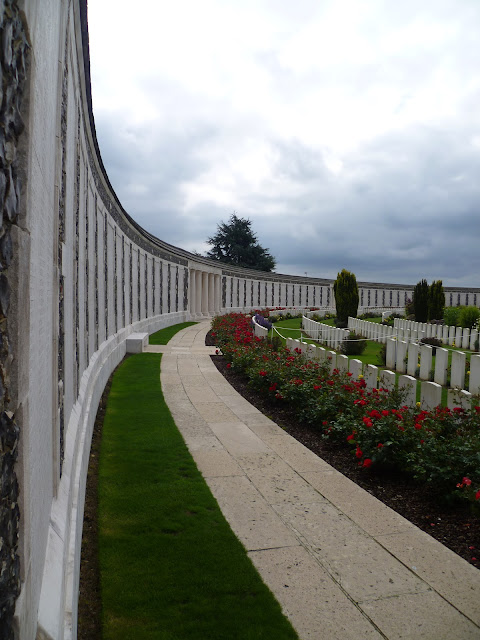 "We can truly say that the whole circuit of the Earth is girdled with the graves of our dead. In the course of my pilgrimage, I have many times asked myself whether there can be more potent advocates of peace upon Earth through the years to come, than this massed multitude of silent witnesses to the desolation of war."  -  King George V 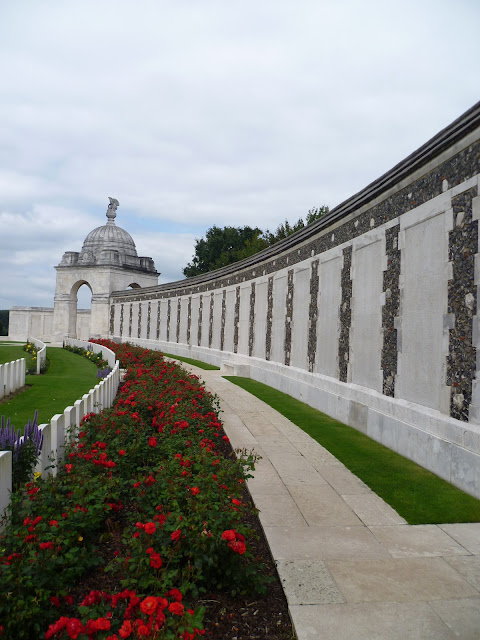 The name of this memorial is believed to stem from the Northumberland Fusiliers, who, upon seeing the German Pill Box defences, thought they resembled Tyneside worker's cottages. 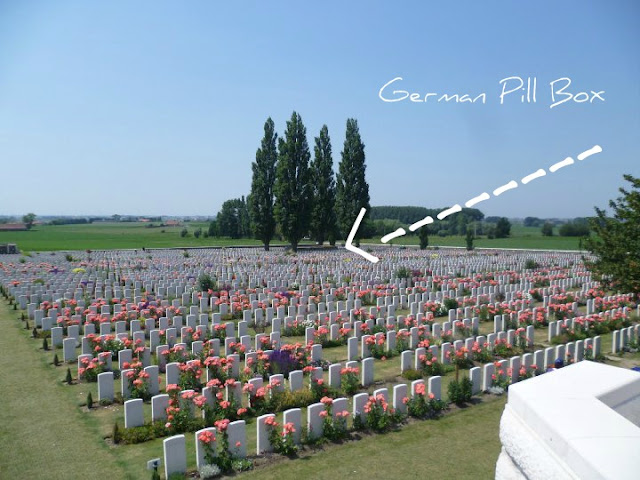 When I first visited this area in 2010 -  it was a day of scorchio proportions. As you can see from the sky. Bluest of the blues!

I was able to walk up and sit upon the Cross of Sacrifice, which although sounds sacrilegious in some way -  a lot of people do. It is the best way, in fact for me, the only way to get a real sense of scale.

And I think you need that. To be able to try and absorb. Because there are so many rows to walk through, to witness and to remember. It can all become a little blinding. 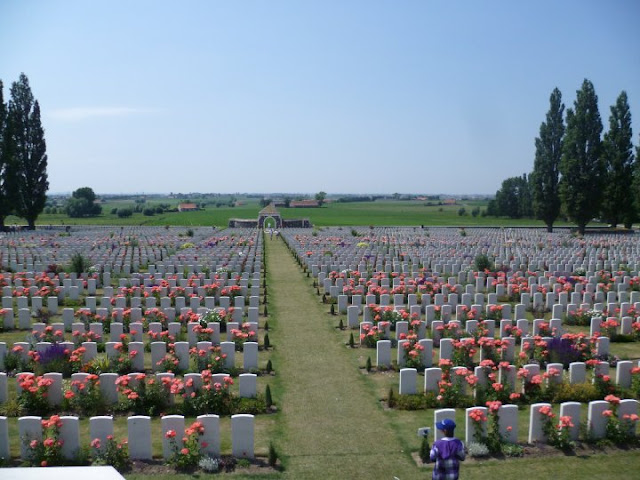 Have you ever seen anything like this? No. Me neither.

The scale of it shall never cease to leave me, mouth agog thinking to myself, and occasionally muttering "What.. the...actual... f..."

Ok -  so -  I feel that plenty for today's visit. A little bit more to come though.. so don't change the chanel too quick..