The Postmistress - by Sarah Blake - review 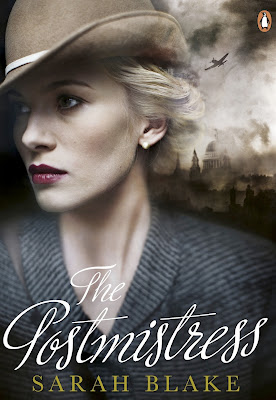 It is 1940, and bombs fall nightly on London. In the thick of the chaos is young American radio reporter Frankie Bard. She huddles close to terrified strangers in underground shelters, and later broadcasts stories about survivors in rubble-strewn streets. But for her listeners, the war is far from home. Listening to Frankie are Iris James, a Cape Cod postmistress, and Emma Fitch, a doctor's wife. Iris hears the winds stirring and knows that soon the letters she delivers will bear messages of hope or tragedy. Emma is desperate for news of London, where her husband is working - she counts the days until his return. But one night in London the fates of all three women entwine when Frankie finds a letter - a letter she vows to deliver...
__________________________________________________________
I had spotted this in numerous charity shops over recent months and wondered why there were so many copies out there to be had on the cheap. Ahhh -  a TV book club type affair. A sure fire way to fill the second-hand book shelves with plenty of the same novel.

It took me a while to break the back of this novel. It could have been the fact that I started it on Boxing Day during what became a very long and tedious journey to see family. Or, it could have been that there was a lot going on at the beginning and I found myself continually flicking back to confirm to myself who was who.

But – once I had, I became quickly attached to the characters of the book. I feel that Sarah Blake created the atmosphere’s within the narrative very well -  I really felt, at points, like I was watching a film, such was the description. I did start to wonder half way through why it was titled The Postmistress, when it seemed to me that a lot of the plot focused on other characters. But, I paid this little heed as I was carried off by it all. I could not put it down. I wanted to race to the conclusion.

When it finally arrived, I have to say I felt a little empty. Now. I shall be honest, as I always try to be. I started to wonder what the point of the novel actually was. As I finished the final chapter, I found myself pondering the great writing, the yarn spinning, the character formation and the journey they had all been on. But, there was something that failed to add up for me.

Thankfully -  there is an explanation at the back of the book by the author. Which made my alarm bells go off. If you have to explain to readers what the story is about and what you wanted to convey -  then that leaves the reader questioning why it was not just clearer in the novel? Surely? I like to think that I am of average intelligence. Had the angle been in there -  I would have spotted it. But, by the last page I was frowning. Not good.

All that said -  I did enjoy this book. I liked the facts within it and the inspiration for the book in the first place. All of which is contained within the authors closing words.

Despite this, if you spy it nfor a 3rd of the RRP, like I did, then I still think it worth the time.