The Tale of a Home Hair Cut

Picture the scene. Me - staring forlornly at my hair, wishing I had asked my Nan to cut it when I saw her over Eatmass.

I am bored of how fluffy it gets, how the ends are so much darker than the rest due to over-dying (again) and generally wanting a second bash at The Chop.

Get a cuppa. This post is a long-un. Unlike my locks... 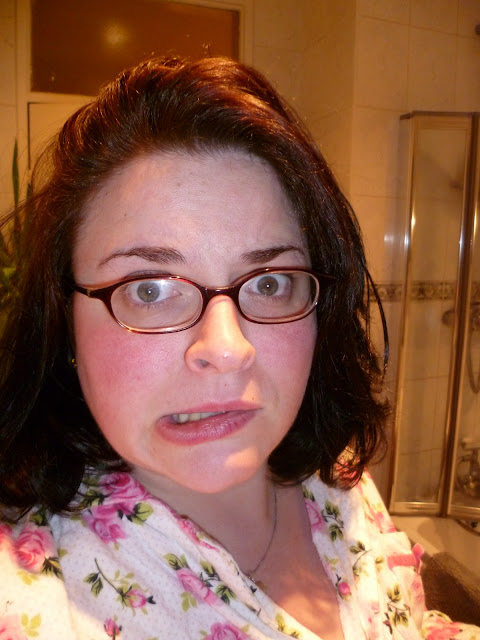 Cut (pun intended) to me having the brainwave of asking The Beard to "just cut an inch or so off the bottom -  it'll take 5 mins". Off of my clean, but crucially, for this tale, dry hair. I am standing in the bath, in my PJ's, a bit hot & sweaty from cleaning. I thought this the best place for the operation to be performed, because then the small amounts of hair can be swept up & binned. This will only take 5 mins, right? 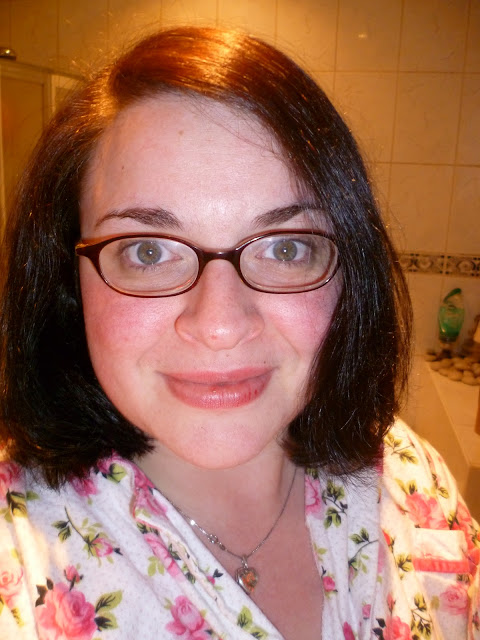 The Beard is renowned for being able to cut straight lines free-hand. The edges of our left over wrapping paper could be used as a ruler. It started off well. Snip.. snip..snip, whilst I stared at the grouting on the bathroom tiles. I could feel that he was about finished. That was 5 mins I thought. And then. Well then - The Beard bolted.

We had been having a conversation about using my needlework scissors to "neaten it up", as opposed to the kitchen ones we had been using
(somewhere out there I can hear my Nan & Aunt fainting).

But -  he failed to return. I thought I could hear him hyperventilating. I turned and caught sight of my hair in the mirror. I let out an involuntary screech. Followed by sobbing, rocking and whimpering. 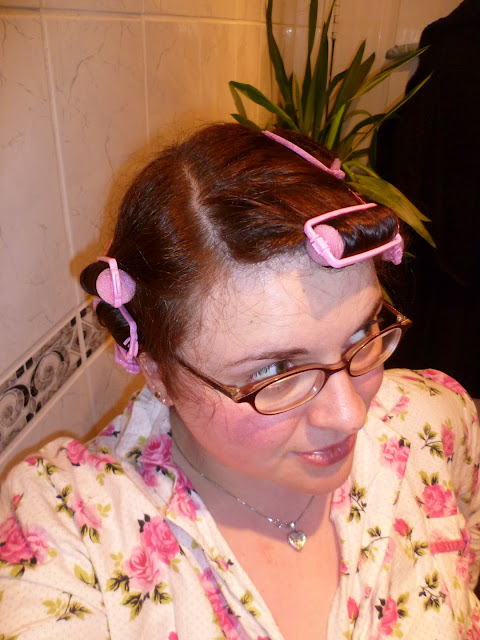 The left hand side was perfect. The right hand side, at the back, was above my shoulder. The Beard was shakily rolling a comfort smoke and repeatedly muttering:

I think my beloved flying into pale shock made me switch into practical mode. I had to cut the rest to a presentable length. Which made me feel a little sick. After I had ceased swearing, I looked at things rationally. I was unwashed, make-up free and standing in stale sleepwear.  And my hair was straight. So, I fired up the steam rollers, plonked them in, had a shower, applied slap and a frock and took them out. Curls really do hide a multitude of sins. It looked retro passable. I was relieved.

But.. how would it look with a proper, overnight set.... 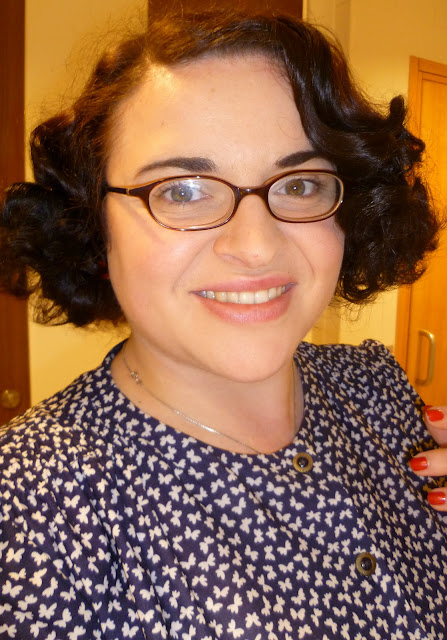 Bogs at the office. Oh the glamour!

The very same evening, before returning to the grind with hair that was as much a shock to me as anyone else, I set it with sponge rollers. I have not used these bad boys for a good long while, favouring perming rods. But due to the lack of hair I am used to, I just could not get it to go round the rod. So, I reverted back.

I leave my rods in, stuffed up under a hat, during the winter months whilst I commute. I did the same with the rollers. I could not wait to see what I had to play with. The above shot is pre-8am, just after a quick brush out. I have to say, I was chuffed.

But, I was most worried about those short back bits. Would they have curled? Would they be sticking straight out? The only thing for it, was to do a timer picture of the back of my own head.... 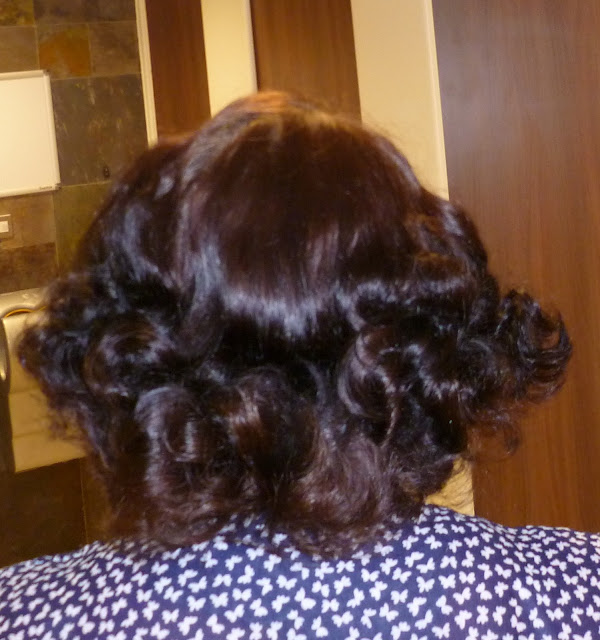 Oh! My! Giddy! Aunt!!! I was ecstatic! I think I actually clapped. It may not look like much to some, but the back of my barnet is something I have always struggled with. I had some lovely comments from colleagues. Little did they know the anguished history behind it all. The Beard was still apologising to me as I left for work.

But, how would it hold? My hair is thick, and it does drop. So, out came the camera when I returned home.
(You will note I have a penchant for taking hair photos in the bathroom.) 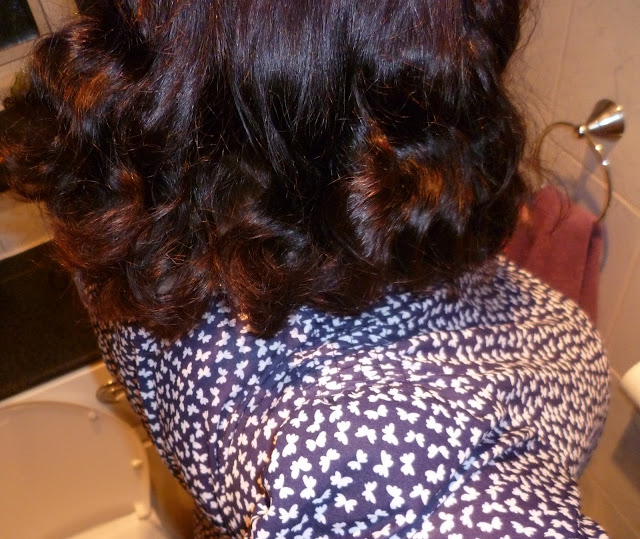 I am more than pleased with how it now holds a curl. All day. 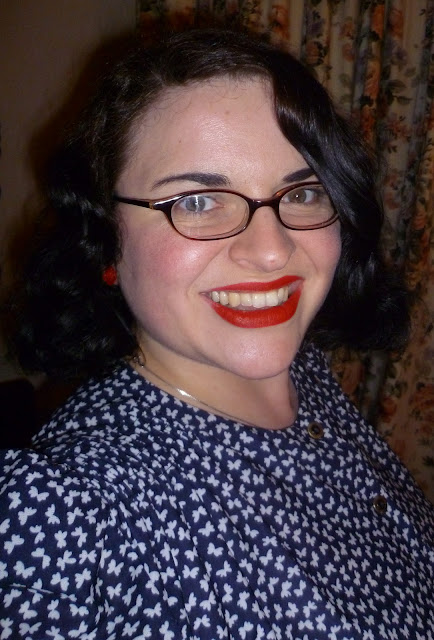 Needless to say, I shall never ask such an ask of The Beard ever again. In fact -  he has threatened to leave me if I even think about uttering  "..Could you do me a favour.. could you cut my hair? It'll will only take a moment.." 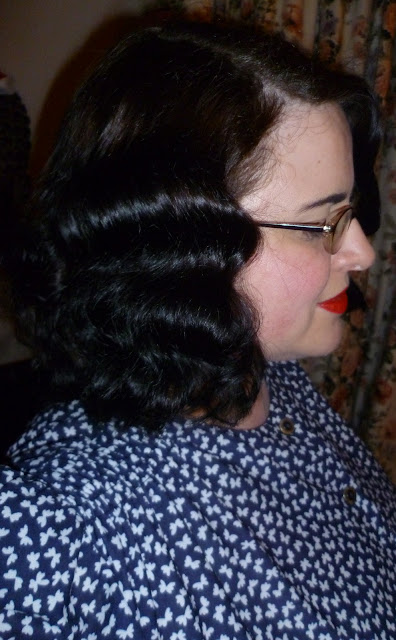 It had settled into nice waves during the day. Hurrahs!

It could have been soooooo much worse than it is. But, it is now manageable. It holds a style all day. It takes moments to wash.

So, The Beard, I salute you.

But, what do you think, dears? Am I papering over the cracks? Or does it look alright?

(*holds breath.... looks out occasionally from behind the cat*)