So, ready for more? I shall try to keep my rambling to a minimum, but this post encompasses a fine museum, a trek into the middle of a field, the laying of a very special wreath and the newest cemetery in France. 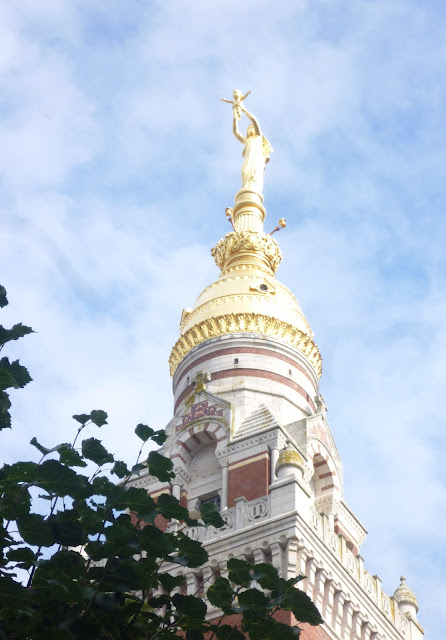 The weather was glorious on our third day, just as we were finishing our stint in France and heading off to Belgium. Typical.  The Madonna and Child atop the Basilica of Notre-Dame de Brebieres in Albert, was in all her shiny, golden glory. Hit by a shell in 1915, badly damaged and near collapse, legend had it that whoever made the Golden Virgin fall would lose the war.


Lovely and scorchio it may have been, but being Brits after all - we were thankful of the cool chasms of The Somme Museum, situated beneath the Basilica. This vast network of tunnels deep beneath the town's streets served as shelter for the townsfolk during WW2. 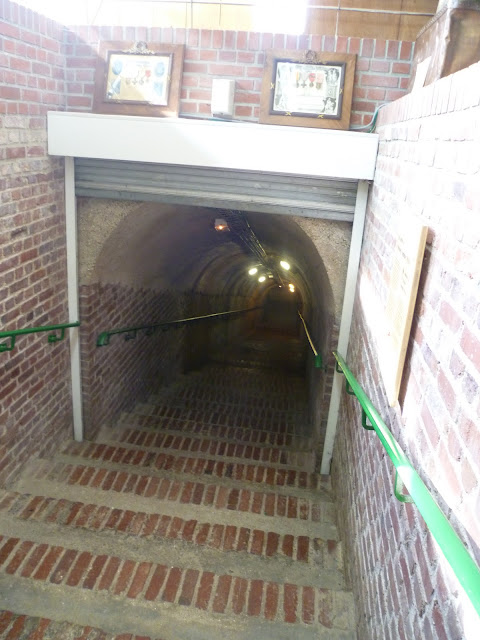 It was mighty cold down there if I am honest (yeah -  I know.. too hot.. too cold.. too whingey) but I enjoyed the museum for the abundance of artifacts that it has on display. 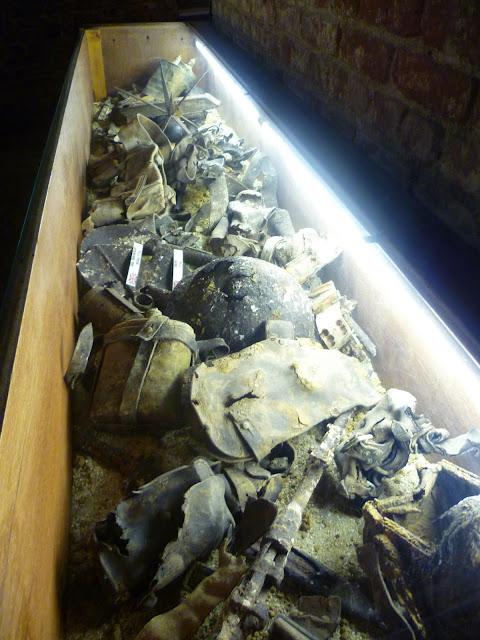 It did amaze me what seems to have been rounded up and kept for posterity. All of it is well displayed and the information boards are, well, informative, both for the knowledgeable and beginners. A perfect combination. 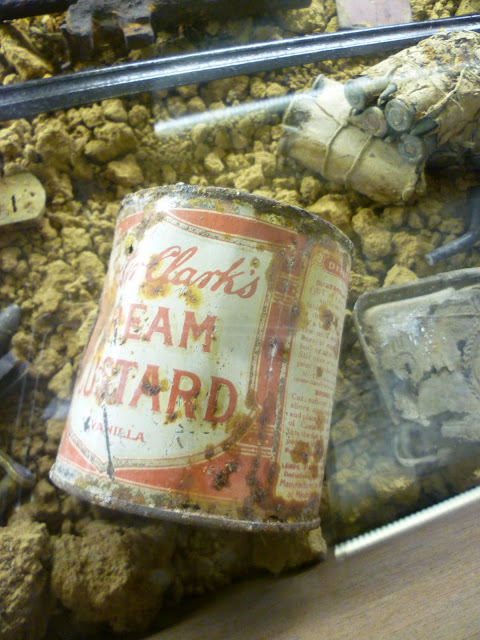 The museum is also home to some fabulous trench art. The attention to detail that has gone into every piece is clearly visible and one of my favourite pieces is below. Although many of the artifacts, such as this, have been donated, there is rarely any back story to read  -  which I feel is a bit of a shame. 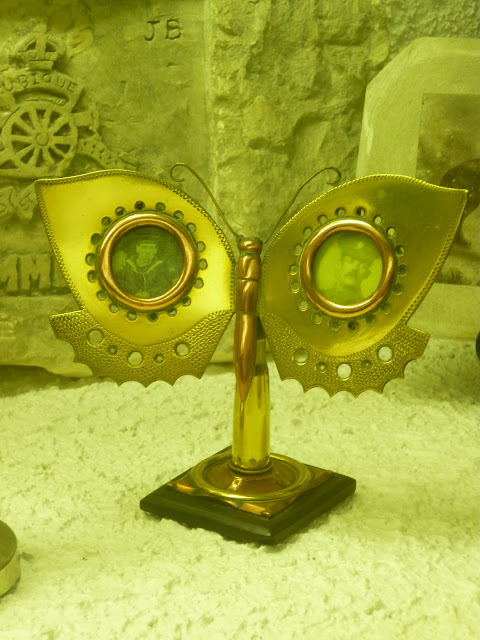 There are also real, touchable items on display. These barbed wire supports, for example, gave an eerie reminder of the battlefields. This would be behind glass in the UK -  so it was unusual to be able to get up close to something like this. 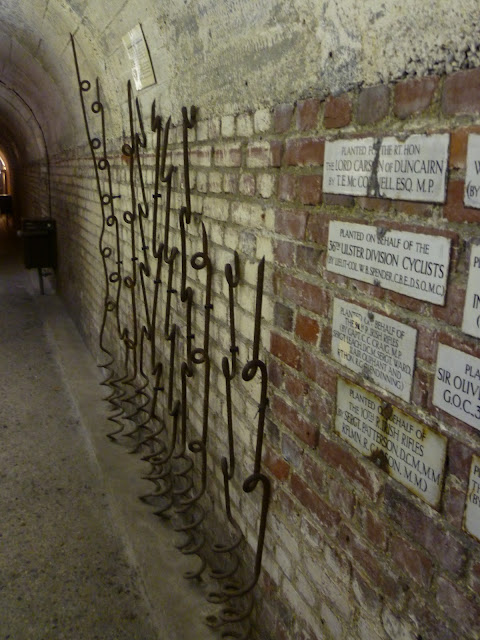 Thankfully, what is behind glass are these mannequins. Certainly not the worst I have ever seen, but some of them were quite comical in their unintentional way. Pretty much like every mock up I have ever seen then. That said, these sorts of things do have their place and are the best way to display uniforms. 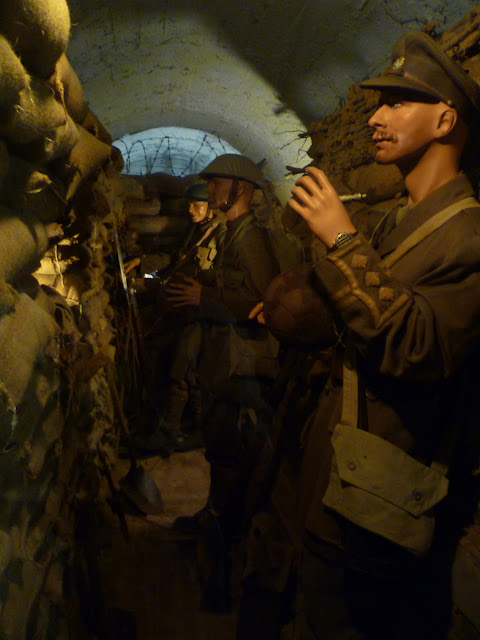 The thing that struck me most, aside from the trench art, was the store room of artifacts that just seemed to have been dumped into one of the alcoves. I like the way that they have just been left there, with no write ups and no glass, just some railings. I think this pile speaks for itself. 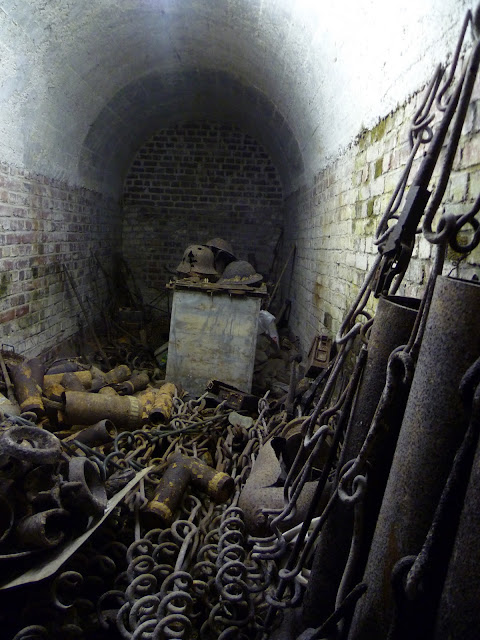 And, like all museums I have ever visited, you exit through the gift shop. Now, last year, I bought a piece of trench art. I had no idea that this sort of thing was on sale. So, this year, bearing the aforementioned in mind, I returned with plenty of cash. But, alas, there was not much to be had. I did buy one piece, for about £30 - but I had been prepared to buy a lot more. It would seem that this sort of thing is in short supply now, possibly bought up by other tourists or perhaps museums. 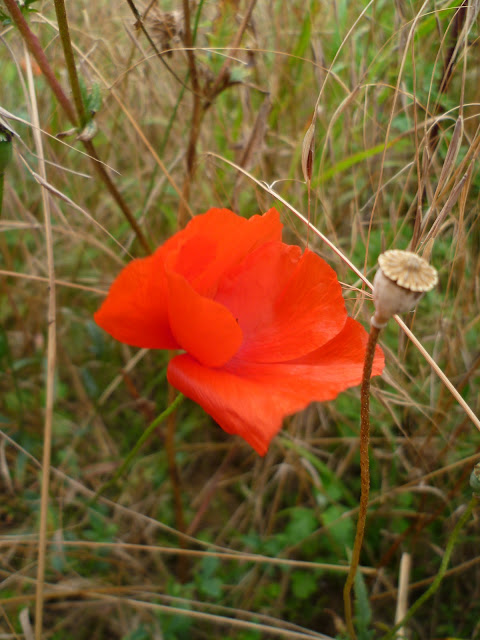 We said Au Revior to Albert, jumped in the car and made our way towards Ieper, Belgium -  aka Ypres or Wipers. But, this being a go-see-do-stuff kind of trip, there were always things to do along the way. And this part specifically involved Gramps.

On our first trip, Pops had put in a lot of work finding out information about Gramps, were he was based, where he was killed and -  where his trench would have been. 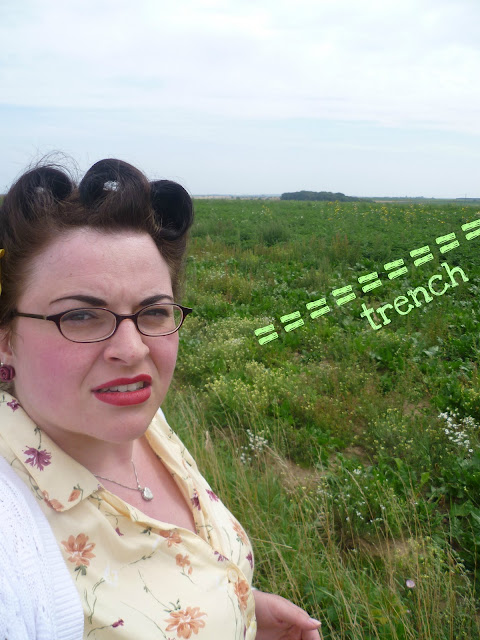 We went back this year to show Mum and The Beard, and like my visit to Arras, the emotion involved was no less. No sound except the wind in the grass and the birds flitting about. Being there, in the middle of a field, it is hard to imagine men having dug and lived in trenches that can still clearly be seen from aerial shots of the landscape. 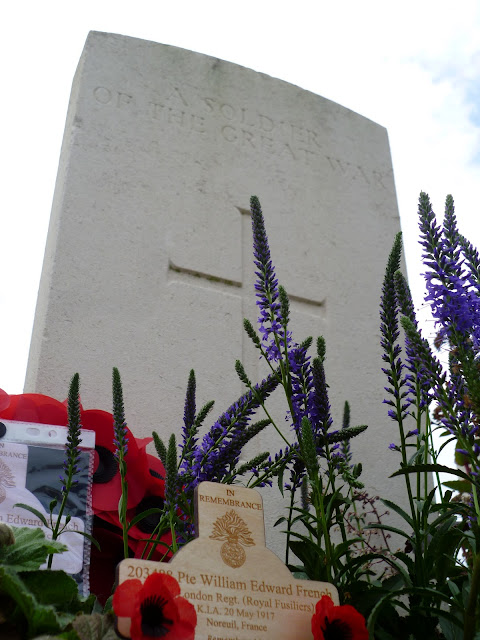 From here we headed into the small village of Noreuil. This is the where the limited war diaries that we have place Gramps, on the day of his death. The village has a small Australian Cemetery that contains 2 British, unknown graves.

As Gramps was killed in this village, we figure, chances are, one of them might actually be him. Obviously we have no proof, but, as a family, we choose to believe that it might be true. And as such, we lay a wreath. 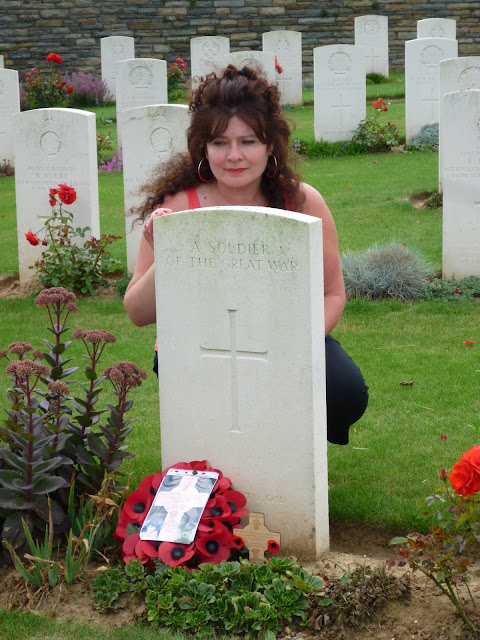 As there are 2 graves, I laid my wreath (again -  prepared by Dad -  he's good ain't he) at the same place as last year and my Mum placed hers at the other. 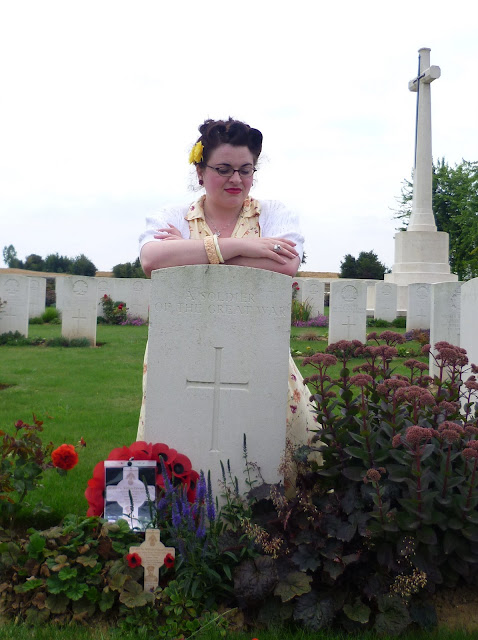 Noreuil is a very quiet place which has many a field, with many a poppy. So, I decided to snatch one for my diary. I am pleased I took a photo of it, as by the time we reached the hotel in Ypres, it had turned a deep red. 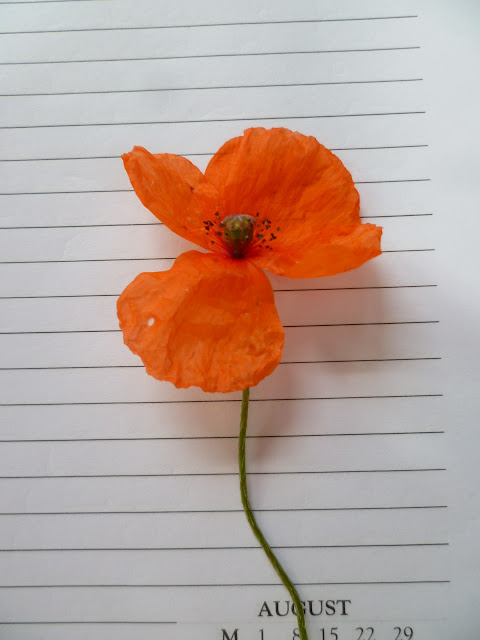 Last stop for the day was the new cemetery at Pheasant Wood which is the resting place of 250 British and Australian soldiers who died in The Battle of Fromelles. 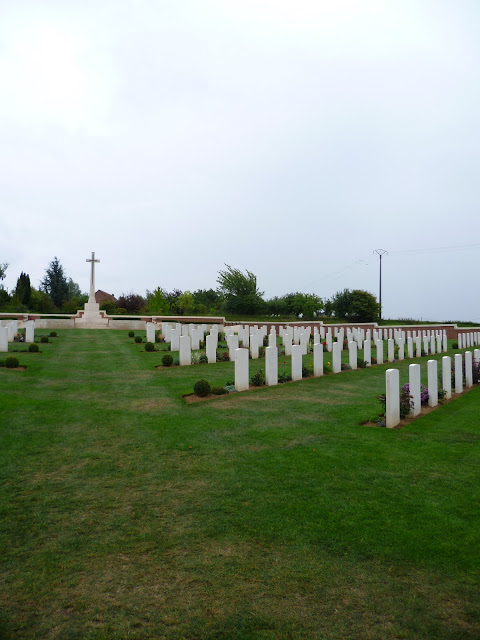 On a visit to the Imperial War Museum last year, I was lucky enough to see a small exhibit  telling the tale of the burial plots, how they were discovered, the artifacts that were recovered (including a return pass to a soldiers home country of Australia) and the building and interring of these lost, but not forgotten, men. 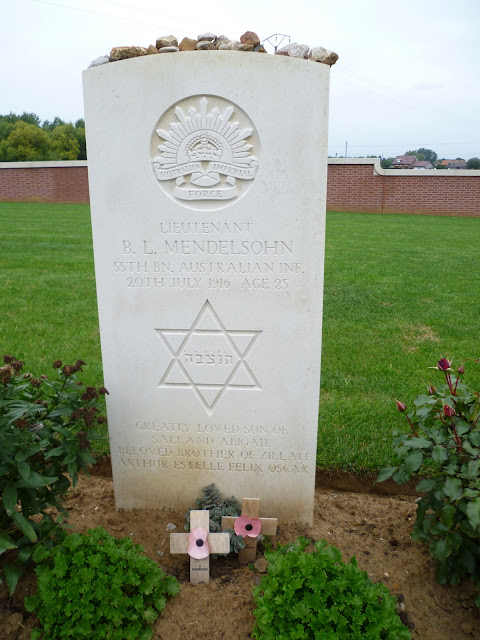 The rain had started to come down in earnest by this point, and I did consider rushing back to the car. I am glad that I decided to walk around the whole thing, because had I not, I would have missed the below grave stone. The interesting thing about Pheasant Wood is that, due to the time that has passed and now that the confusion of the time is over, more information has been found out about the men involved. And as such, more personal details have been included by the relatives. Such as nick names, personal messages from children, or simple poems. 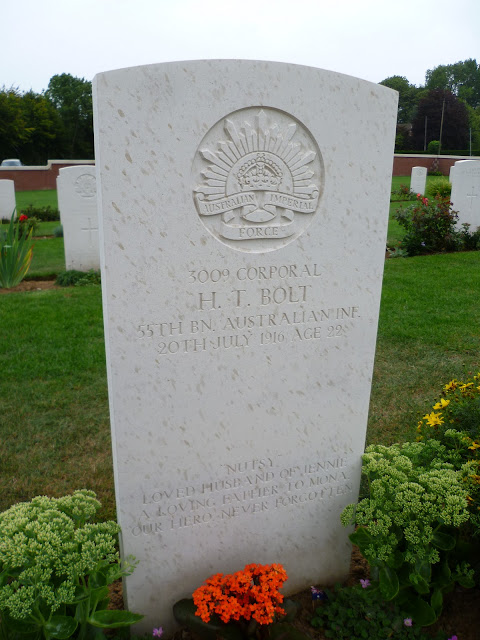 The last leg of the journey was taken over by a quick kip in the back of the car and some re-reading of Testament of Youth, before we arrived in Ypres. We decamped to our rooms, I ate more Kinder Schokobons than I care to admit and I suffered an episode of "Rosemary & Thyme" -  but, somehow, ended up watching it until the end.

We then met for dinner at a lovely restaurant called Poppy's (very popular with tourists, reasonably priced & proper scrummy) and then headed up to The Menin Gate for the 8pm ceremony.

On the way back we went past an artist's stall. A certain gentleman called Soren Hawkes. Par and me met him last year and ended up chatting to him quite a bit on both nights we were in Ypres. We both bought some prints and bade our goodbyes. I went back to have a peek this year to see if he had any new work and was handed this....... 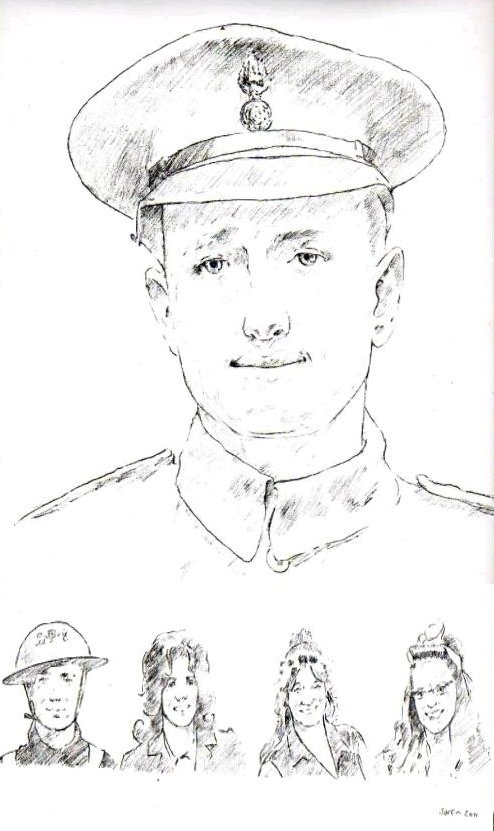 This is an original, made to measure, just for me pencil drawing, which my Dad had arranged. Of the direct line from Gramps to me. Featured are my G-Grandad, in his ARP WW2 uniform, my Nan (aka Glam), my Mar and me.

Needless to say, I burst into tears. Which my Dad was filming. Notice how I chose to omit the offending live image sobfest from this post.


That's all for our third installment.