Goodbye to All That - Robert Graves - Book Review 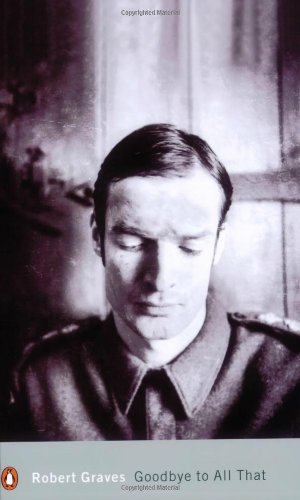 In 1929 Robert Graves went to live abroad permanently, vowing 'never to make England my home again'. This is his superb account of his life up until that 'bitter leave-taking': from his childhood and desperately unhappy school days at Charterhouse, to his time serving as a young officer in the First World War that was to haunt him throughout his life.

It also contains memorable encounters with fellow writers and poets, including Siegfried Sassoon and Thomas Hardy, and covers his increasingly unhappy marriage to Nancy Nicholson. Goodbye to All That, with its vivid, harrowing descriptions of the Western Front, is a classic war document, and also has immense value as one of the most candid self-portraits of an artist ever written.

Now. Call me stupid (please, only whisper it), but had not heard of this book until my recent trip to Belgium. It was proudly displayed in the front of a shop selling various trench artifacts. I had, of course, heard of the phrase, much like I have heard "..all quiet on the western front..." -  but had not really thought much more beyond that. Proof that I am still learning about these things (is it possible to ever stop?) and that these phrases have become synonomous with this historical event, drifting into our psyche.

So, I began, And I have to admit, I fell a little bit in love with his style of writing. It is easy to have a misconception that a writer of his generation could be, well, all classical about it. Thankfully, Robert Graves writes almost as though you were just sitting in a pub listening to him. Which makes it very easy to relate to him.

There is a certain amount of honesty in his recollections -  from his early childhood, to the point he decided to leave England. His sexuality and his strained marriage are alluded to, but nothing is given as much time as his experiences in the trenches. Which is just as well, as this is the reason I was reading it. But, background always has it's place -  it helps me connect with the author.

But, just like someone telling you a tale in your local boozer, some elements have to be taken with a pinch of salt. On first publiscation, there was a bit of a furore over those in the public eye who were featured. Outcry that Graves' recollection's were fabricated and exaggerated. So -  just like most pub yarns then.

There are always certain embellishments when it comes to repeating a story. So, I shall make allowences for any that there may be. This did not alter my admiration for the frank account of what Graves witnessed and remembers.

The only downside to it, is the last few chapters. It does trail off a bit, but I persevered.

History is only as good as the historian, and I am happy to sit back and let this story envelop me.