I promised you history -  and hopefully I shall deliver. Here follows the first installment of my second dalliance into the WW1 fields of the Western Front. I went last year with just my Par, but this year we took along Mar and The Beard too. The man we are researching, after all, is my Mum's Great-Grandfather, my G-G-Grandfather -  aka -  Gramps. 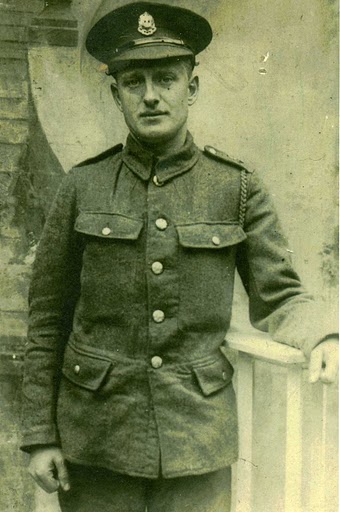 We set off early. And I mean early. It was hot -  hotter than a hot thing on a hot tin roof, so I was pleased to be on the ferry and off to sea and its cooling breeze. Alas breeze equates to wind -  and that, as we know, is generally naff-tastic for curls. So out came the headscarf. 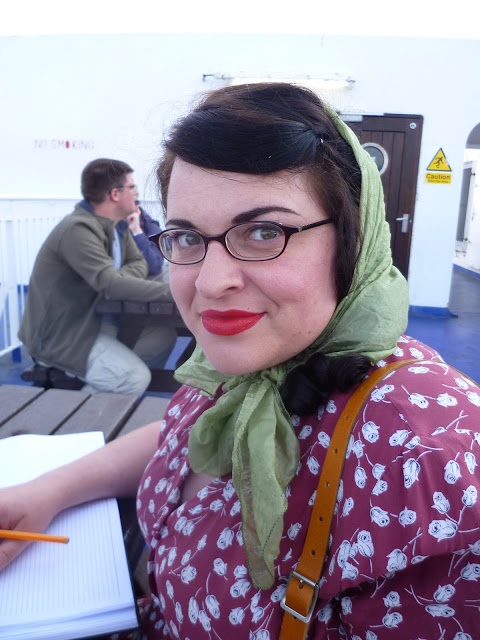 Which got me looks. The difference between this years trip and last, is that I don't really notice the sideways glances any more. Well -  not all the time. Then again, on this particular vessel, if you were not wearing a comfy slacks, screaming at a child or buying more duty free than you could carry, you were bound to stand out. I ignored and got on with catching up with my diary. 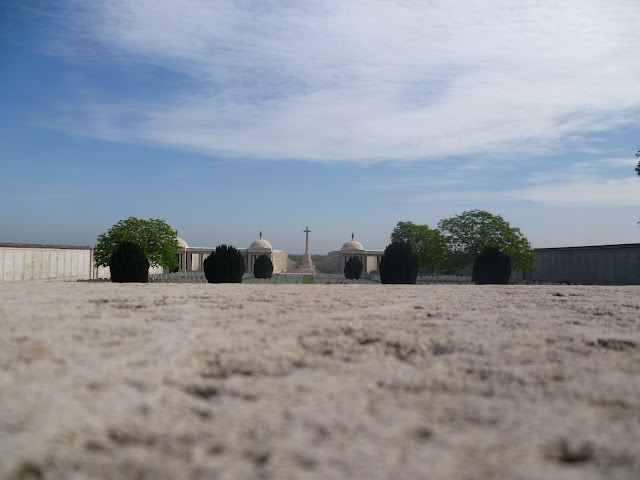 Off the ferry and a sweaty drive to Loos Memorial, our first stop. Pops had some pictures to take for some chums back home of their relatives resting places, which left me wandering about, looking for names from a list. The amount of time and care taken over the burial plots and memorial walls never ceases to amaze me. Each and every plot was pristine. 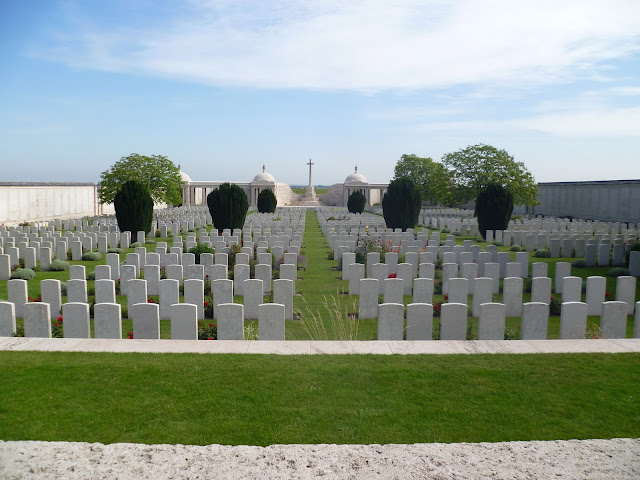 And the location of a lot (and I mean a LOT) of cemeteries are in the middle of working farmers fields. They were crop fields in 1914, and they are crop fields once more. Which makes them all the more poignant to me. This one is by a main road. It is just sitting there -  in all it's white stoned glory. 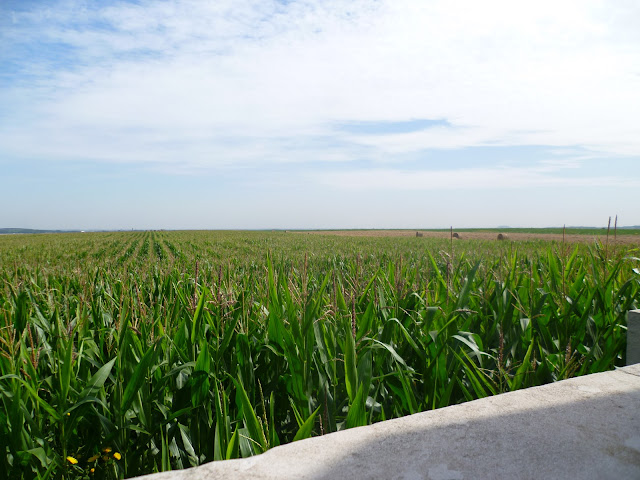 I think more upsetting than those headstones that have names are, invariably, those that don't. And there are all too many of these. 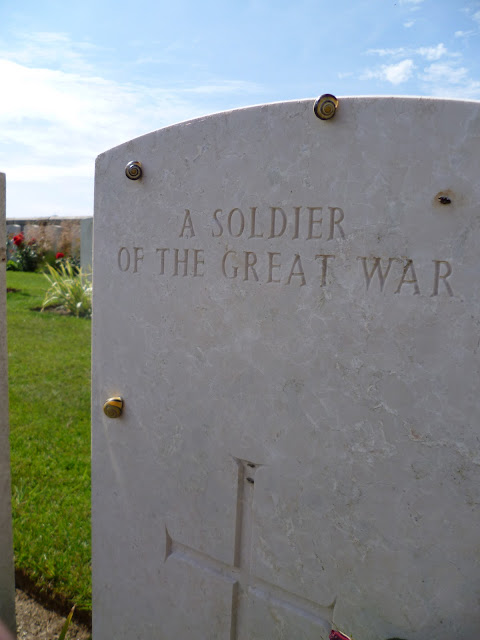 After this, we headed off to Vimy Ridge. 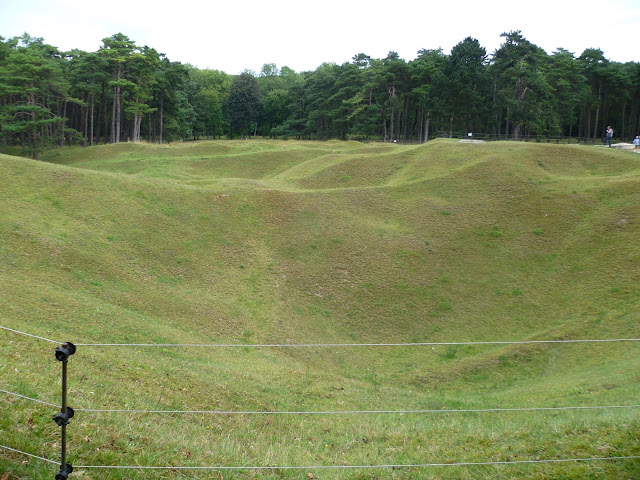 When I arrived last year, I was a little baffled and taken aback by the undulating landscape and the trees. One of the tour guides, who are all usually Canadian students on a 2-3 month voluntary placement, explained to me that all the lumps & bumps were, once, gaping shell holes. 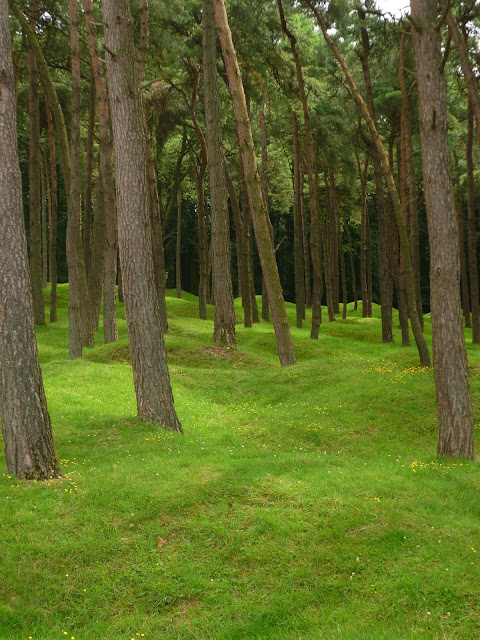 And that each tree was planted by the Canadian government of the day to symbolise a life lost or wounded defending this ridge.

For more on the battle of Vimy Ridge, have a scooch over here. 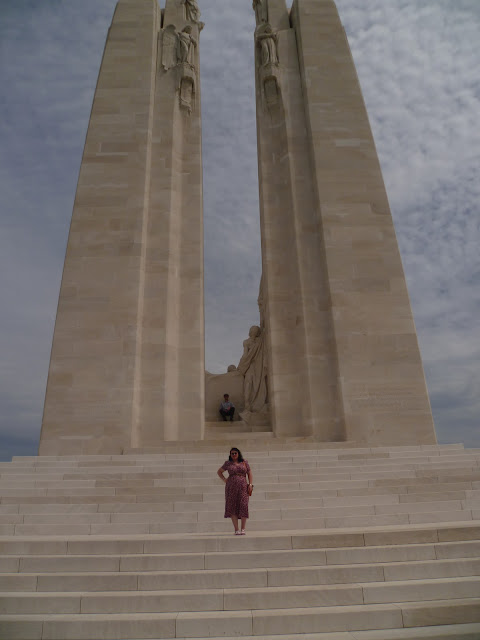 There are no words to describe the immensity of this memorial. You can see it from, literally, a mile away. It is a beacon on the local landscape. It is so colossal that I could not even get it all in one snap. 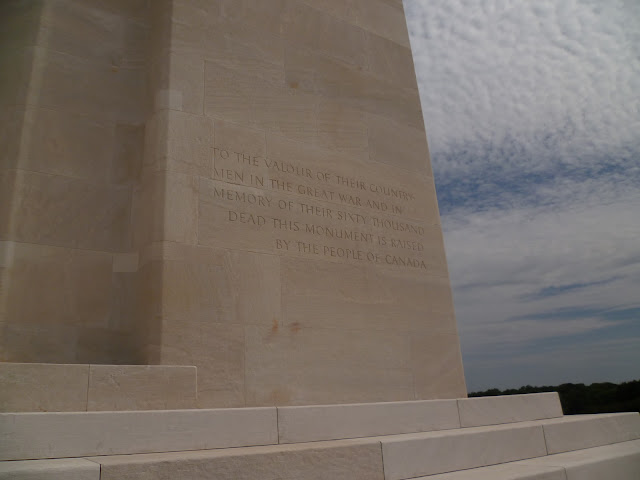 It was a beautiful day with clear skies and blinding, when standing upon a monument made of cream stone, sunshine. It actually hurts the eyes.

We strolled around for a while, until the heat got to us. We bade our farewells and headed off to the town of Arras. 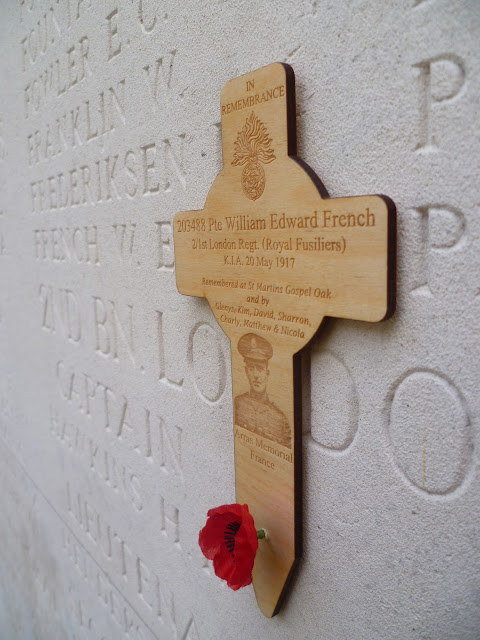 The Arras Memorial holds a special place in my heart. For it is here, amongst the many thousands of names carved into the Portland Stone, that Gramps is immortalised. Proof that, although he has no known grave, he is remembered.

Last year, 93 years after he was Killed In Action on May 20th 1917 near the small French village of Noreuil, aged just 30 years, the same as I am now, I was the first member of his family ever to visit.

The initial occasion produced emotion on a scale I have not encountered before. This year we returned, with more memorial crosses (which my Dad had made bearing an image of Gramps) and wreathes from his existing descendants. The emotion had not subsided. 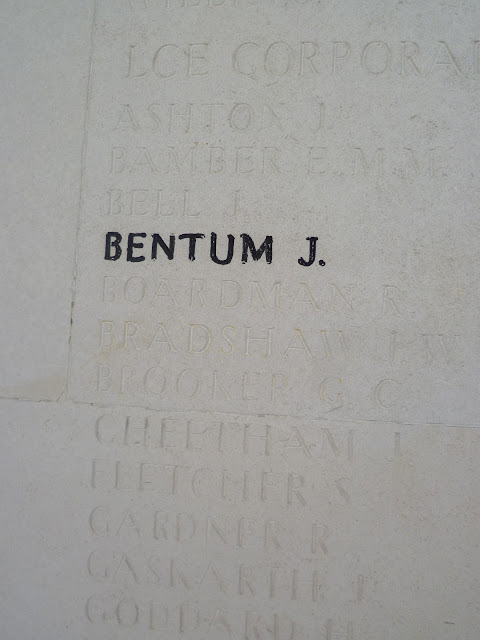 Gramps shares the curved walls with the likes of Walter Tull, who's name has been pencilled over by some, I am sure, well meaning Tottenham Hotspur fan. But it goes to a whole new level when indelible marker is involved. I find this kind of act disgusting and the exact opposite of whatever the perpetrator was trying to create. This was not the only one I saw, during my trip. Which saddens me greatly. I do feel, however, that more could be done with some of the names that are up high on the walls, so that they are not so shadowed. But then, there are so many names, I am not too sure how this would be tackled. 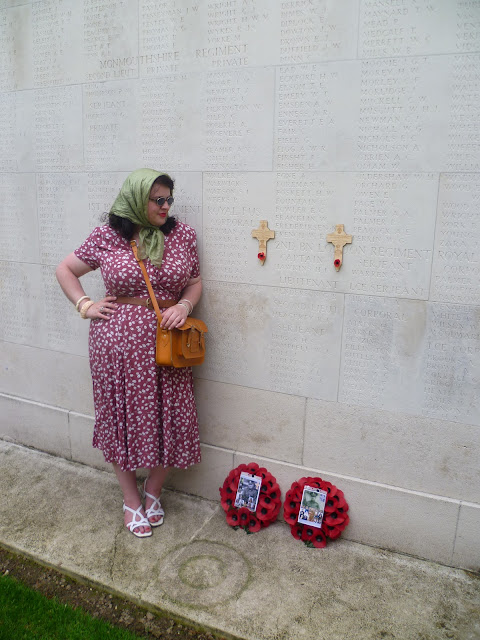 We laid our wreathes and said fair well to the name on the wall of a man I never knew, and yet I feel deeply connected to.

We then headed off for our final stop of the day. This was as much a surprise to me as it was to the locals. Driving a Crysler into a small French village -  and I mean small, as in 20 houses , farm buildings and a church -  and getting out looking a bit time warp, tends to make the curtains twitch a bit. And in this case, people to come out and have a good old gawp. With their kids. And dogs. And pitchforks (I jest) 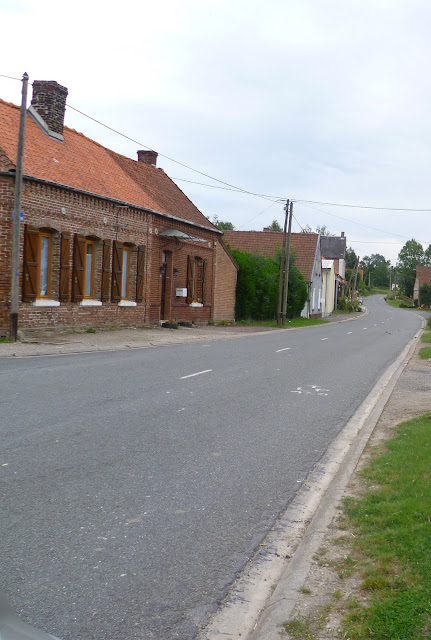 The reason for visiting Ivergny was due to the fact that my Dad had discovered that Gramps had been posted there for 9 days before being sent to the front. I was spooked. It looked no different, to how I am sure it looked then. Minus the Tommies and their khaki uniforms en masse. Chickens checking out the grass, locals peeking out to look at the English. And all I could keep thinking was "...he was here, physically here, walking this piece of road, with no knowledge of what was to come". I had a very quiet smoke and got back in the car.

We had a bit of a joke, which lifted my mood, that we would be on the front of the local rag with the headline:- 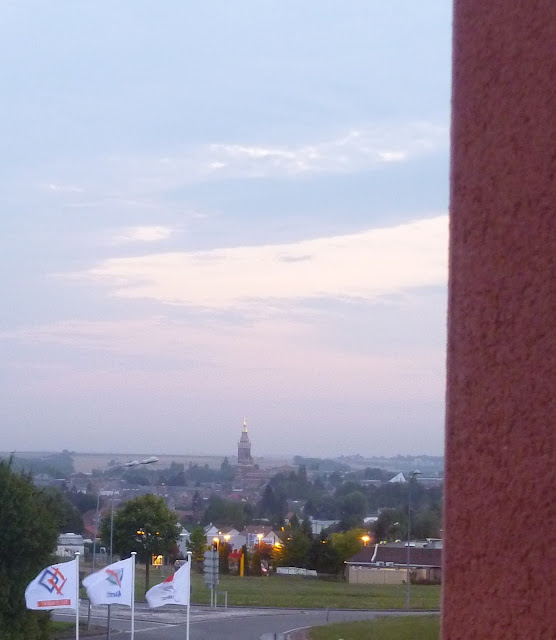 So ended our first, pretty full on, day. We rested up in Albert, where I could see the Basilica from the hotel window. A hotel with Poppy carpet. It took all my willpower not to carve out a nice rug sized piece to take home. 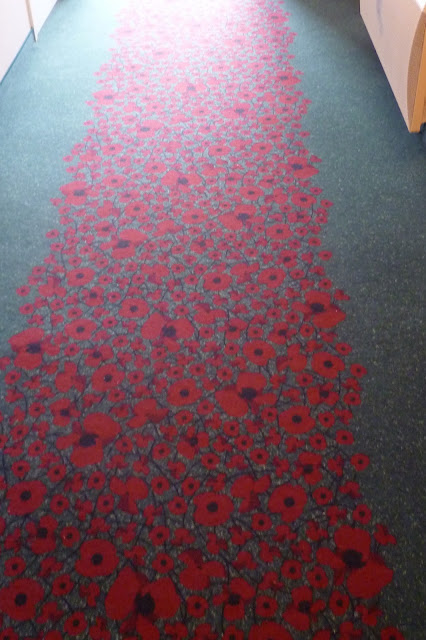 I hope you are still with me & have enjoyed my regaling thus far!

There is a lot more to come in Day Deux