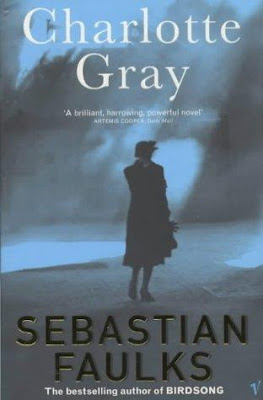 The blurb
From the bestselling author of Birdsong comes Charlotte Gray, the remarkable story of a young Scottish woman who becomes caught up in the effort to liberate Occupied France from the Nazis while pursuing a perilous mission of her own. In blacked-out, wartime London, Charlotte Gray develops a dangerous passion for a battle-weary RAF pilot, and when he fails to return from a daring flight into France she is determined to find him. In the service of the Resistance, she travels to the village of Lavaurette, dyeing her hair and changing her name to conceal her identity. Here she will come face-to-face with the harrowing truth of what took place during Europe's darkest years, and will confront a terrifying secret that threatens to cast its shadow over the remainder of her days. Vividly rendered, tremendously moving, and with a narrative sweep and power reminiscent of his novel Birdsong, Charlotte Gray confirms Sebastian Faulks as one of the finest novelists working today.

I have to confess that I have not read Birdsong. I know, I know. I should be ashamed. And I am. But, when I first came to read it, I could just not get into the flow of the authors style. I have to say it was the same, in the beginning, for this novel.

However, I am beyond pleased that I persevered with this book, although it took me until page 200 something for it to click. After that I was besotted with it. Telling a story of love, loss and true grit within the confines of Occupied France, I followed the story of Miss Gray and the search for her missing lover.

That, alone, should have been enough to keep me enthralled, but it is the side characters that captured  my heart the most and became the most important to me. And lead me to openly weep on the train. Again.

The fine weaving of character plot and personality leads you to think not only on what was found during the Second World War, the likes of comraderie, strength and gumption but also what was lost.

This novel is technically the last installment of a triology that is preceeded by "Girl at the Lion d'Or" and "Birdsong" respectivly. But I did not notice anything connected to other books, so for me it is a stand alone. And well worth a butchers.