What a facking Liberty

Considering the obscene amount of pictures to follow of me in this dress, how could I not call my post this?

I had not worn this dress out of the house after picking it up in a charity shop back in February for a penny pinching £7. It is a 1970's of "Liberty Poppies" fabric. It does have long sleeves, which I had planned on snipping off and making into shorter ones. That plan was karboshed when I discovered that I could simply tuck them under. Which now means I also have a wintery dress. Most excellent! 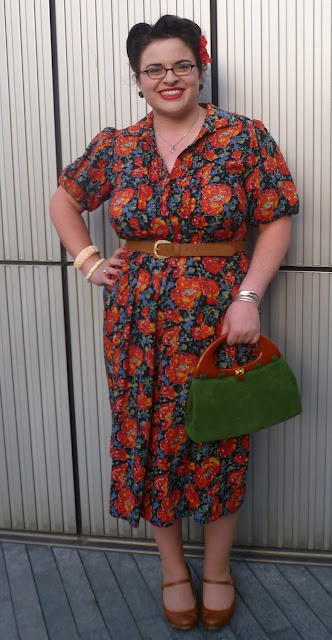 But this post is about the soiree of "Swing for Skin". Because this time last week I was beyond excited (with a dash of nerves for good measure) about attending the inaugural charity event in aid of DebRA.

For the last few months I had a permalink in the top right corner of my blog, advertising this event. I can't remember how I found out about it, but I sure am glad that I did. Not many people know about DebRA and what they are about.I have to say that I only know about them due to the abundance of their charity shops in my locality. And you know me and chazza shops. 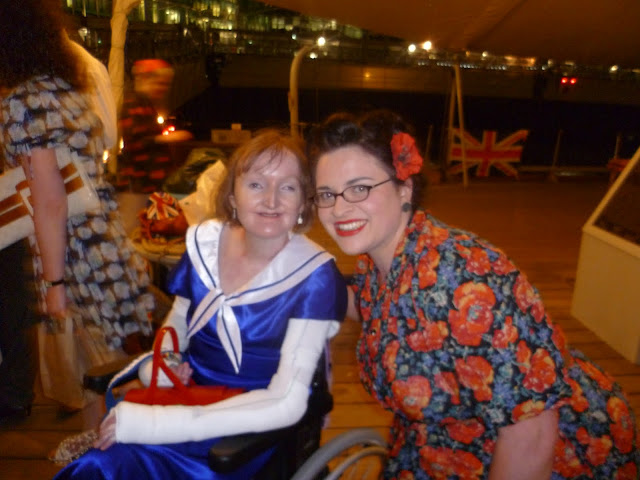 DebRa is a charity that supports people with a genetic skin blistering condition Epidermolysis Bullosa (EB).  This condition effects not only the exterior of the sufferer, but also the interior. The smallest of jolts or knocks and painful blisters are caused which tend to become open wounds that can potentially become infected.

Hence the bandaged limbs of the organiser, Melissa. Looking resplendent in what I believe is an Able Grable frock of a sailor persuasion, she had the misfortune of meeting a slightly worse for wear me towards the end of the evening. You can chat on Twitter all you like, but meeting new friends face to face is always a joy. She was very patient with what I dimly remember as my inane chatter. That'll be the brandy. What you cannot see in the above shot is Melissa's ahhmazing red patent t-bar shoes. That matched her bag. Tres envious! 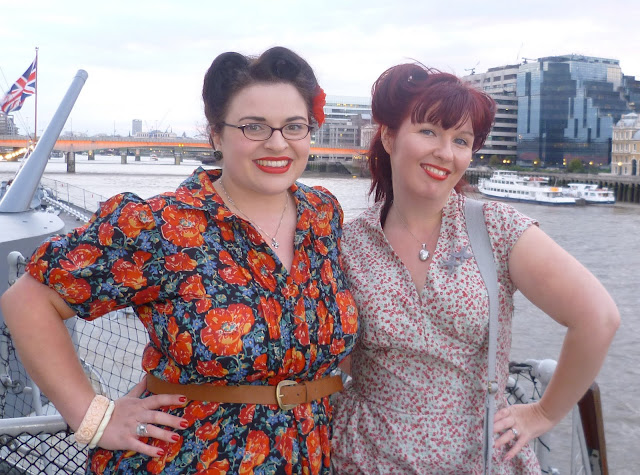 The event was held on the HMS Belfast. I know. Cool, huh? I was not aware that you could hire this floating monument. In fact, I had not been on it since I was a child, on a school trip. I also forget that it is actually part of the Imperial War Museum, which sounds pretty obvious now I have said it. We could explore the ship, shinny up and down ladders -  with decorum and grace - and go into the dark, dark rooms. To be greeted by some fairly scary waxworks. Of men. In hammocks. 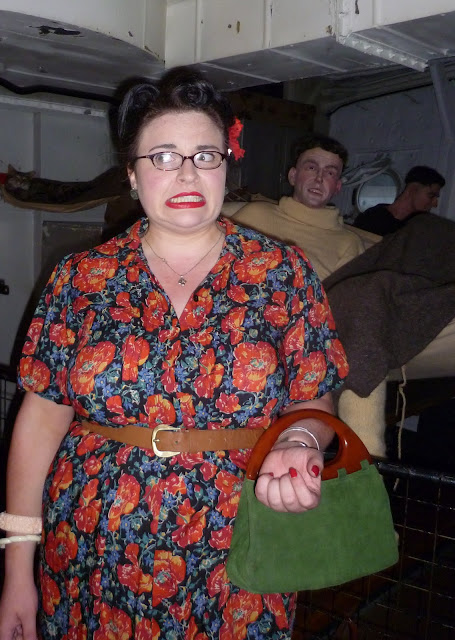 When I say dark -  i mean dark!! We did toy with the idea of lurking and jumping out on someone -  but came to the conclusion that if someone did that to us, we would in all honestly, wet ourselves in fear. 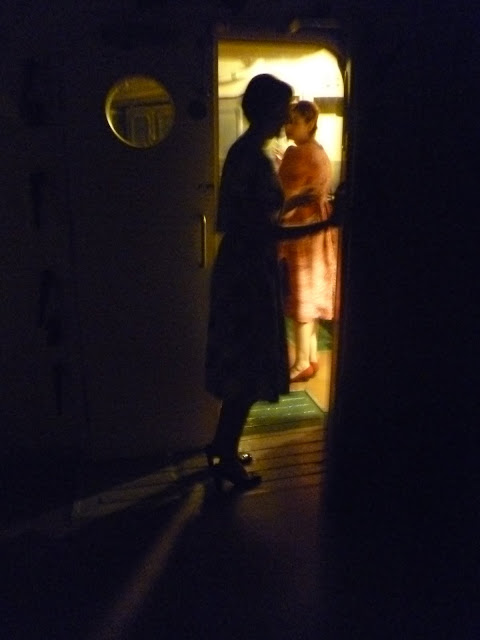 Being a smoker, (... i know.. i know.. bad for your health..yadda yadda..) I was surprised to be allowed to smoke on board. I thought that I may have had to spend my evening being unsociable and wandering back off the ship to have feed my roll up need. So, a lot of my time was spent on the upper deck with some of my delightful friends as well as new acquaintances, smoking and drinking. And being spooked by this guy... 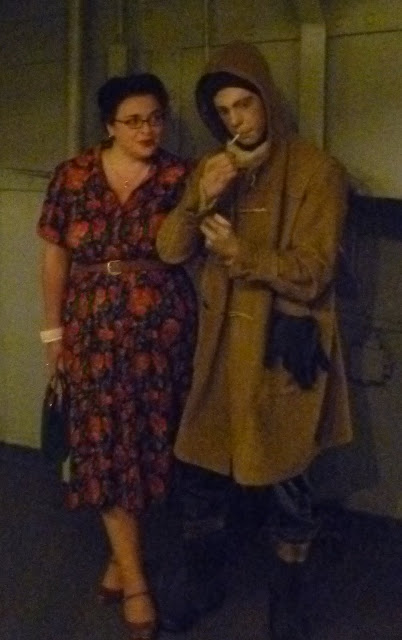 I said, at the beginning of the post, that I was a little nervous. I always get a bit shaky at mega blogger meet ups, which is how I saw this event. A lot of people that I have admired from afar for a long time were going to be in attendance. Did I look ok? Was my hair right? Did I have lipstick on my teeth? Would I be too brash, too sweary, too me? 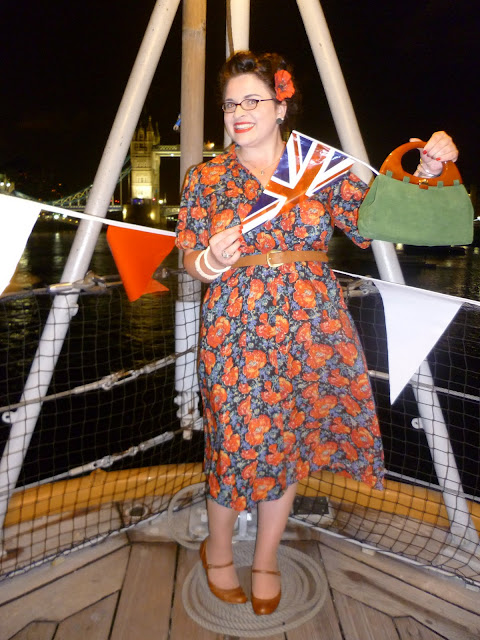 Honestly, I don't know what I worry about. Each and everytime I have met someone new from the vintage blogosphere they have been delightful. I had the joy of spending time with people who I now consider proper, real life friends in the forms of Penny Dreadful Vintage, Perdita's Pursuits, Lady Cherry Loves. 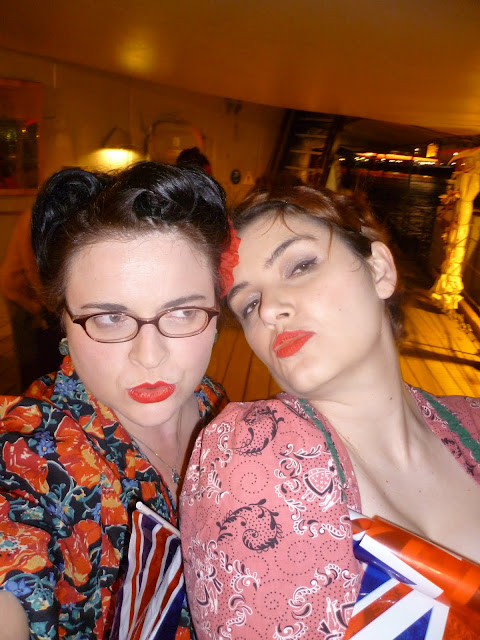 I also got to meet a bevvy of vintage beauties such as:- Natasha from The Crafty Ms De Vil, Lisa a la Snoodlebug,  divine Miss Fleur De Guerre, Naomi of Vintage Secret, Min from Red Legs in Soho and Jeni of Yesterday Girl. None of which I have pictures of. Well -  I do -  but they are all too fuzzy to be published. On account of booze. 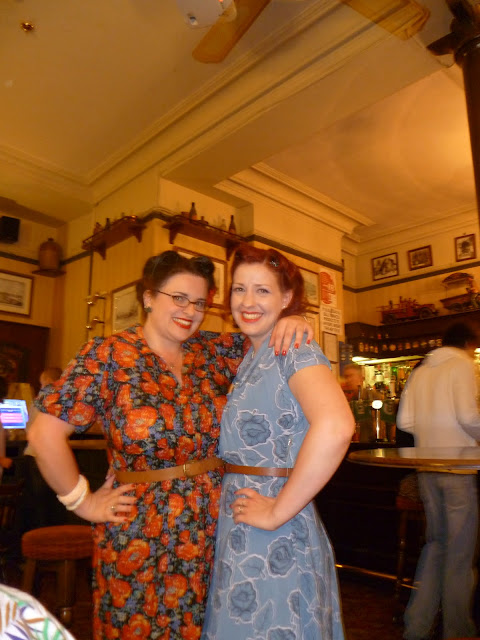 And of course, the lady that encouraged me to pull my finger out and blog -  Gemma from Retro Chick. This picture is taken in the pub that we bundled into during our untimely shore leave. I seem to remember laughing a lot, taking dodgy photos of people and laughing some more when a drink was spilled into the rim of a hat.

There is a rumor that Swing for Skin may very well return next year - so keep your peepers peeled for updates. I was pleased to be part of something that was so much fun. Things I have forgotten to mention are the singers, the raffles, the cake and the hairdressers that were present. That'll be me, being unsociable on the "Puff Deck" then. Not actual  puff you understand. That's illegals.

For pictures of something other than me in this dress -  have a butchers at Penny Dreadful's post.