Into the Arms of Strangers - Review 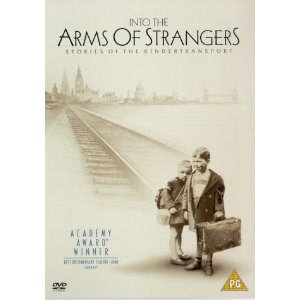 The blurb....
In the nine months prior to World War II, 10,000 children left their families, their homes and their childhood and took a journey that would change their lives forever.
Narrated by Dame Judi Dench, this moving documentary details the historic events leading up to the journey from chaos in Europe to safety in Britain. Recalling the tears, the trauma, the waiting, and in a few cases, the joyous reunion, surviving "kinder" tell their story as never told before.

I found this DVD through the handy little suggestion thingy at the bottom of Amazon. This is how I find most of the things that I end up watching and/or reading and reviewing. God bless it, I say!

Now, as the blurb would suggest, this is a documentary and a moving one at that. It taught me more about the Holocaust and the lengths that were taken to try and rescue as many children from the onslaught as possible.

Had it not been for this one man and his couragous efforts to protect the children of people he both knew, and had never met before, they would have in all probability, been consigned to the fate of their elders.

There are touching moments in this DVD. Tales of children torn from parents, not finding out what had happend to them until many years, in some cases, decades later. Although these "children" are now grandparents, they have never forgotten the actions of one man.

A short celebration of what determination and humanity can do in the face of such a monstrous machine.