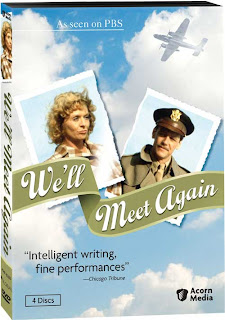 This critically acclaimed wartime drama is an epic adventure of love, friendship and courage during the Second World War. In a quiet Suffolk village, life is disrupted when the 525th Bomber Group of the United States Eighth Air Force with its Flying Fortress bombers, its two thousand Officers and its energy and confidence arrive. Despite cultural differences between the brash Americans and the reserved but resilient villagers of Market Wetherby, they pull together to face the common enemy. We'll Meet Again is not only a story of romance but of hardship, fear and sacrifice. Poignant and moving the reality behind this fictional drama makes it more so.

I saw this in a charity shop for the bargain price of £3.99 and, assured by my other half that I would "love it", I thought I would give it a bash.  For that meagre amount of money, how wrong could I be?

Turns out, very. Very, very wrong. Whilst I find the idea of this 1980's WW2 drama something that should interest me, I could not wait for each episode to be over. The editing is awful -  even for the 80's -  and most of the acting is questionable, if not a little bit cringe-some. Which is a real shame.

There were parts of it that I did like.  I loved the relationships between the GI's, for example - perhaps because I love things like "Band of Brothers" for the same reason. And there is ample cardy/hair envy to be had for us ladies. I even liked the late Susannah York's protagonist of Mrs Dereham, to a degree. It also uses original footage in certain scenes that are cut into the show to make it look more realistic. There was a lot of bomber footage I have not seen before. Tres bon.
But for me, it just did not cut the mustard. I found myself mocking more than watching -  from the 80's stage makeup on the actors to the over exaggerated west country accents.

I have read the reviews on various sites where you can purchase this for your very own and it scores very highly. On closer inspection I realise that a lot of the reviews are from people who loved it first time round and it is a pure nostalgia trip to watch it again. But, do not be fooled by the rave reviews it seems to be getting.

I realise that I am watching this with 2011 eye's and was not expecting it to be HBO slick. But I was expecting something watchable that would perhaps engage me, leaving me less time to note it's faults. Alas.

That said it is of it's time and should not be expected to be anything but quaint. But for me and this DVD, we shall not meet again. Back to the charity shop it goes.