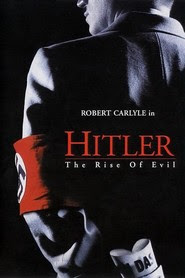 Robert Carlyle stars as the German dictator and leads an all-star cast in this made for TV drama that explores Adolf Hitler's rise to power in prewar Germany during the 1930s.
Motivated by anger and misdirected by ego, Hitler struggles in a world he believes owes him something, enticing Germany in a macabre dance of surrender and control. Emerging from WWI after a stint in the German Army, he accepts their offer to infiltrate and spy on the German Workers' Party. Their nationalism and anti-Semitism match Hitler's virulent personal politics so he strikes while the iron is hot, and by draping his agenda in mythical legends of Aryan superiority, he makes the iron even hotter by repeatedly striking it....


I bought this a while ago, after my Dad recommended it to me. And I am very pleased that he did. I know that I am talking about Hitler here, but I am interested to know more about the man who created the era I am besotted with.

And I feel that this drama does just that. Originally shown in 2 parts on ITV, it is 130 minutes of watching history unfold. I am used to seeing Robert Carlye dancing to Donna Summer in the unemployment que of The Full Monty, or glassing people as Begby in Trainspotting. Well, it is all change for him in this role.

There are other notable actors in this production, but I did not really notice them. Not even Matthew Modene or Stockard Channing, which is rare for me.  Of all the films I have watched containing any incarnation of Adolf Hitler, this is one of the very best. 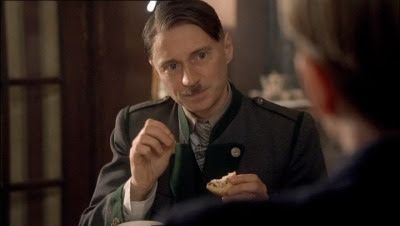 The transition between the young, WW1 damaged Adolf and the flamboyant, confident Chancellor Hitler that emerged afterwards is clearly depicted. From his boyhood in Austria, his time in the trenches of sodden Flanders, his artistic endeavors and his swift entrance into the wasteland of Germany's political arena - it is all here.

With it comes the beginnings of his anti- Semitic prejudice, starting with the Jewish Doctor who treated his Mother's failing health and including with his Jewish comrades on the front line. 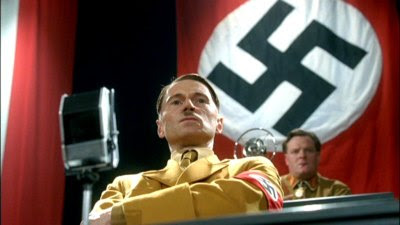 But it is Carlye's twitching, softly spoken, ranting, spitting development of the Fuhrer that makes the lasting impression. Not since Bruno Ganz in The Downfall have I seen such a believable performance.

Albeit not, always, historically correct, it is something to plop into the DVD whirler if you want to whet your whistle when it comes to knowing more about the man behind the tashe. It is not always easy viewing for the more knowledgeable and I found myself huffing at the TV on more than one occasion. But I do believe it to me well worth a watch.

In fact, I highly recommend it.