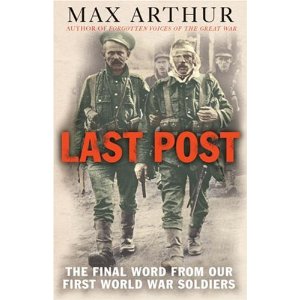 The Blurb...
"FORGOTTEN VOICES OF THE GREAT WAR was the surprise best-seller at Christmas 2002, selling over 60,000 copies in hardback alone. The formula was simple: Max Arthur interviewed some of the 30 surviving British soldiers from the First World War and combined their stories with other interviews in the Imperial War Museum and various private collections. LAST POST is very consciously the last word from the handful of survivors left alive in 2004. When they die, our final human connection with the First World War will be broken: after this book, we will have only recordings or diaries. We will never be able to ask a question of someone who was there."

I read this whilst in France on the WW1 trip last year, having picked it up at a charity shop a couple of months before I left. It is a heartbreaking and fascinating book. Heartbreaking because ALL of these men are now gone, and fascinating because 80 odd years later, the majority of their memories were still as fresh as they ever had been. Shame that it was horrific memories, eh.

That said - it is not all doom and gloom -  there are some funny and light moments throughout their stories, whilst others are a little dull in content. For that, I am grateful I guess, as is translates to me that their particular War was not as eventful or scarring as others.


A great piece of history to have on your book shelf -  if only to dip in & out of and remember the nearly lost youth of the aged gentlemen they were lucky enough to become.