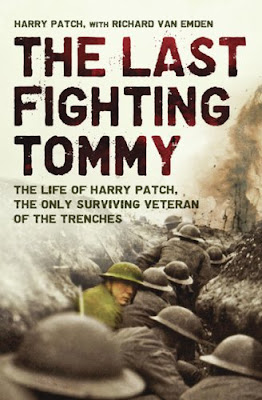 Harry Patch, 110 years old, is the last British soldier alive to have fought in the trenches of the First World War. From his vivid memories of an Edwardian childhood, the horror of the Great War and fighting in the mud during the Battle of Passchendaele, working on the home front in the Second World War and fame in later life as a veteran, The Last Fighting Tommy is the story of an ordinary man's extraordinary life.

I read this book last year, just before my trip to France. Although moved by this book, being in the area where he fought made it all the more real. The book focuses not only on the time Harry Patch spent in the Army, after being conscripted in 1916 until he was invalided out in 1917, but also on his life before and after.

He remembers his childhood with warmth and clarity and the stories he tells are not only important to him and where he came from, but of how England was before the Lost Generation was conceived of. He tells of idyllic days spent in fields, along with his time at school and then on to his first apprenticeship.

His memories of fighting in the trenches whilst serving as an assistant Lewis Gunner in the Duke of Cornwall's Light Infantry, are clear and concise, moving and at times comical. Yes, he maintained his sense of humour, despite the horrors he witnessed and endured. A sense of humour only a survivor can have.

I found reading about his life after the Great War incredibly interesting. It gives an insight into how life was once the shells had stopped and those that were left returned. And with the second war of his life looming, he tells us of how he played his part.

He recounts the meeting with a German soldier who had fought in the opposite trenches at the Battle of Passchendaele, something he admits to being wary of before the day. From then until a time more recent to all of us, he tells us of the dwindling numbers of those he once knew, some he fought with, some he met through numerous celebratory and remembrance services

Although the author of this book passed away in 2009, aged 111 (one month, one week and one day), this fact makes his story all the more poignant. Until 1998 he refused to speak of his experiences. He was afforded a gracious and soulful funeral in Wells, Somerset with pall bearers from The Rifles and a pair  each of French, Belgian and German soldiers. At his request, no guns were present.

I keenly felt the passing of a generation when the news of his death broke. He truly was one of the last Tommy's.

This book is a glimpse into the life and memories of a private man who became the focus of so much pride and sorrow.