The Children of Freedom by Marc Levy - Review 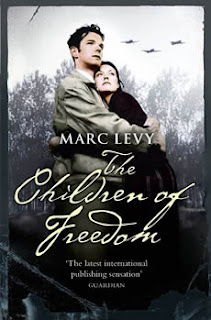 The blurb...
A remarkable story of struggle and survival in World War II by France's No. 1 bestselling novelist Early in 1942, two young brothers join a Resistance group. All the members of the group are young, most of their families came from elsewhere in Europe or North Africa and all of them are passionately committed to the freedom of France and Europe. They find they are not welcomed by other French groups and thus Brigade 35 is formed. For most of them, their growing up, their falling in love, their sense of friendship and family are formed by their time with the group, and between moments of extreme danger and fear, a lifestyle of a kind of normality develops. But tragedy follows when the brothers are arrested, a number of members of the Brigade 35 are killed and a traitor is suspected. The tensions between former comrades and other Resistance fighters mounts and all this against the desperate hope that the invasion by the allies is really drawing near and will rescue them all.

But. It does get going and once you have got that far, you may as well see how it turns out. Take away the slowness and it is a good story that has inspired me to learn more about the French Resistance. And something that makes me read on about a subject cannot be all bad.

This is an internationally acclaimed title that has won a whole heap of awards. And because it has been popular -  I have seen it 10 a penny in charity shops. If you spy it and fancy something depressing and uplifting sentance on sentance -  then this will float your boat.