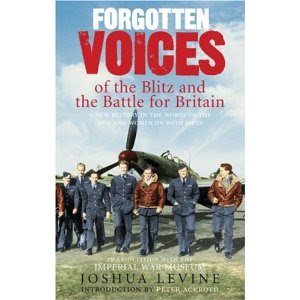 The blurb...
"Drawing material from the Imperial War Museum's extensive aural archive, Joshua Levine brings together voices from both sides of the Blitz and the Battle of Britain to give us a unique, complete and compelling picture of this turbulent time. In June 1940, British citizens prepared for an imminent German onslaught. Hitler's troops had overrun Holland, Belgium and France in quick succession, and the British people anticipated an invasion would soon be upon them. From July to October, they watched the Battle of Britain play out in the skies above them, aware that the result would decide their fate. Over the next nine months, the Blitz killed more than 43,000 civilians. For a year, the citizens of Britain were effectively front-line soldiers in a battle which united the country against a hated enemy. We hear from the soldiers, airmen, fire-fighters, air-raid wardens and civilians, people in the air and on the ground, on both sides of the battle, giving us a thrilling account of Britain under siege. With first-hand testimonies from those involved in Dunkirk and the Battle of Britain, Black Saturday on 7th September 1940 when the Luftwaffe began the Blitz, to its climax on the 10th May 1941, this is the definitive oral history of a period when Britain came closer to being overwhelmed by the enemy than at any other time in modern history."

I read this some time ago -  and have to say that it does become a bit much. These are real life accounts, not fiction, and it takes a little while for that to sink in. And once it does, it really hits home what happened to the UK during 1940/1941.

The format is short snaps of information that, when read continuously, can effect you quite a bit. Well -  they did me anyway. I would highly recommend it.(In fact -  any of the wonderful books in this series are brilliant. And I am so thankful for their existence. The collaboration and collective information within their pages will go someway to ensure that these people and their trials and triumphs are not forgotten by a technology obsessed and consumer driven next generation (sorry -  rant over!!)

You can dip in and out of it -  or read a section at a time. I love the fact that there are accounts from BOTH sides of the fence. Interesting to read not only accounts of Spitfire pilots but Messerschmitt ones also.

If you like your history straight from the horses mouth -  then anything from this series is a winner.