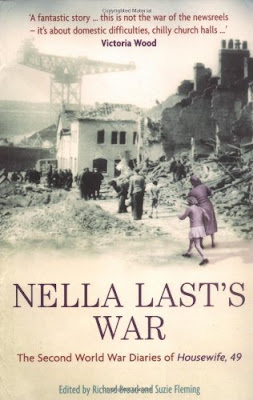 The blurb...
"When war broke out, Nella's younger son joined the army while the rest of the family tried to adapt to civilian life. Writing each day for the "Mass Observation" project, Nella, a middle-aged housewife from the bombed town of Barrow, shows what people really felt during this time. This was the period in which she turned 50, saw her children leave home, and reviewed her life and her marriage - which she eventually compares to slavery. Her growing confidence as a result of her war work makes this a moving (though often comic) testimony, which, covering sex, death and fear of invasion, provides a new, unglamorised, female perspective on the war years."

I bought this a while ago and it has been languishing in my "to be read" pile. On the way out of the door one morning (in my usual "bloody-rollers-take-longer-than-5-mins-to-take-out-AND-style" rush) I grabbed it and I am SO pleased that I did.

Mass Observation is something that has interested me for a while now -  being a diarist (is that a word?) myself -  I like to read what others chose to comment on. I have a whole book of excerpts, from the study as a whole, somewhere to plough through at some stage too.

Nella Last is a typical housewife matriarch who holds her boys in dear esteem and who sees her daily life and routine changed by the beginning on WW2. I found this book fascinating. Not only to see how her life was altered -  but also to see her grow as a person.

Her reactions are at time stoic-  and at others alarmingly depressing. She comments not only on life inside her own head and the 4 walls of her house -  but also her social circle, the political aspect  -  even the weather (which I loved as it helped me paint a picture in my head of how things actually were in her world) She oddly does not comment on bigger events on the days that they happen. For example. she notes Dunkirk only briefly.

If you want to dip onto the past through the eyes of a mother who witnessed and remembered with clarity "The Great War" -  only to send her own sons into the foray 20 years later -  this is the book for you.

If you don't want to read it -  this was dramatised by ITV with Victoria Wood starring as Nella Last -  called "Housewife, 49".