In the words of Calvin Harris...

After the over eating of Yule, it was time to over booze at New Year. As is tradition. The Beard and I hopped over to the Isle of Wight to visit his brother and sister-in-law. They live in Ventnor, a lovely little town right down the bottom of the island. And when I say live, I mean whizz around running The Crab and Lobster Tap. Yes folks, I spent New Year in a pub. With the owners. That are family. Thank the maker for fresh air, bacon sarnies and ibuprofen. Or I might be dead. 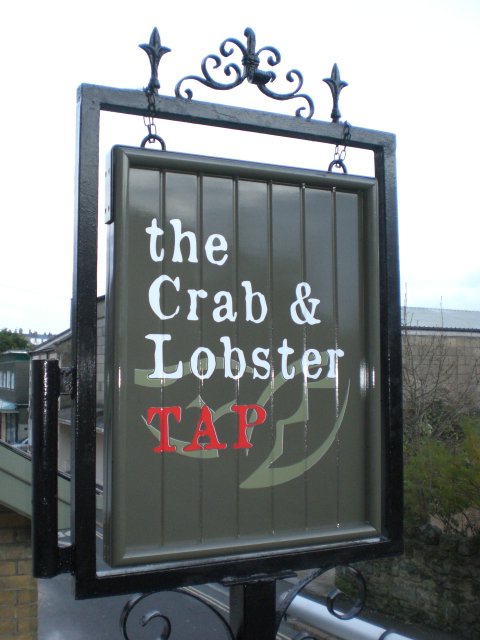 I was afforded the whole of New Year's Eve day (what an odd sentence!) to potter around the town and venture in and out of their charity shops. The I.OW is charity shop heaven. And most consist of proper, old fashioned second hand prices. I snaffled some treats for myself thus... 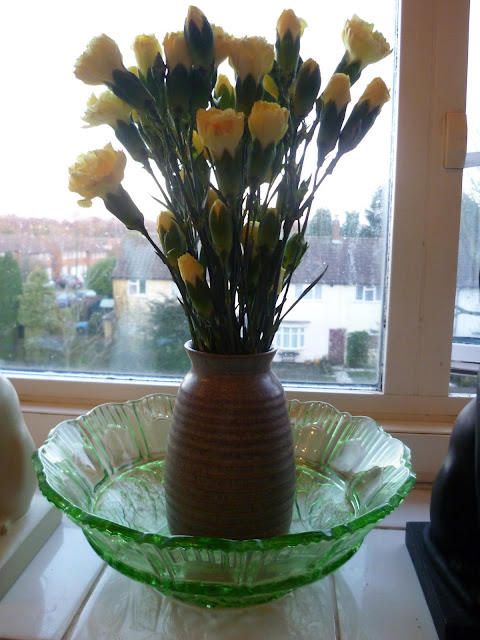 I have a bit of an obsession with this kind of green glass. Someone once told me it became bery popular
in the 1930's -  but I am not too sure how true that is. 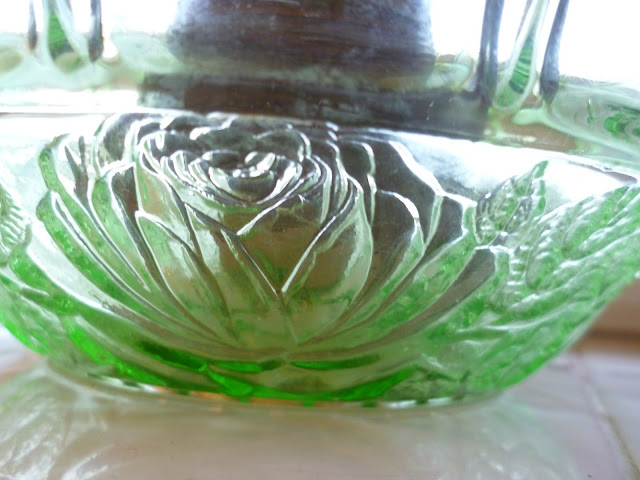 And I kind of bought the bowl on a whim, because of the lovely rose detail and because it was only £3. So I had to find a place for it. In the kitchen window 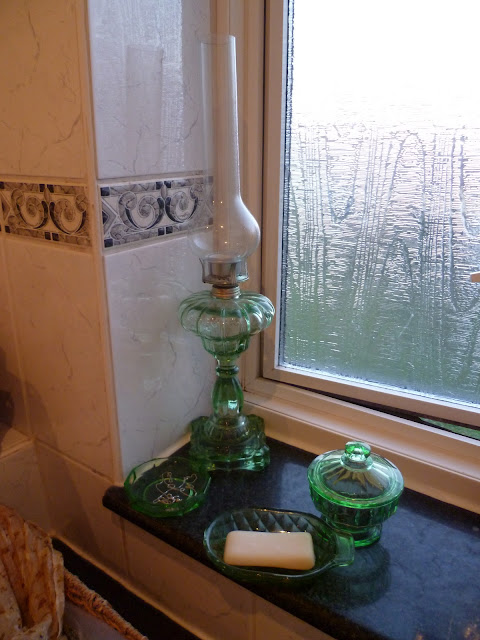 Lovely bathroom glass including a handy soap holder and a little trinket type pot, that now hold my hair grips.
And the tall lamp at the back is a tea light holder. Winner! 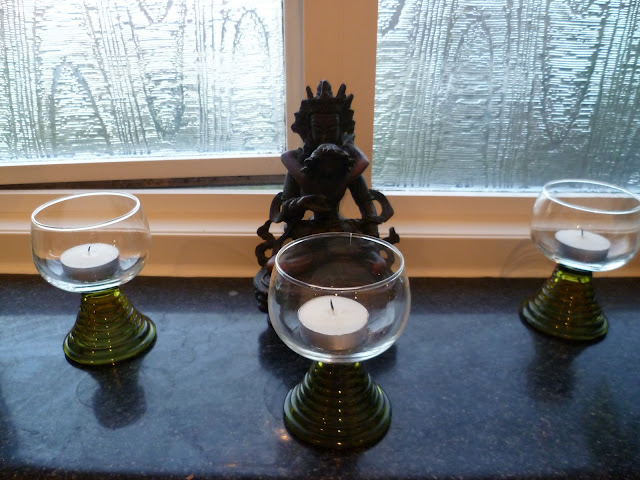 Not the same glass, granted, but only £2 for the set. 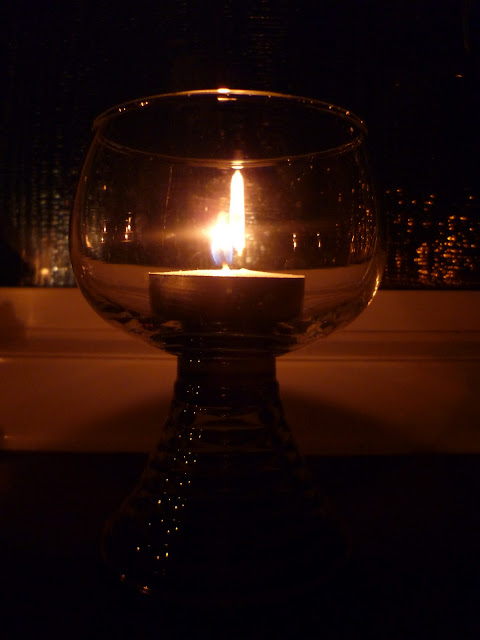 And they sure do look purty! 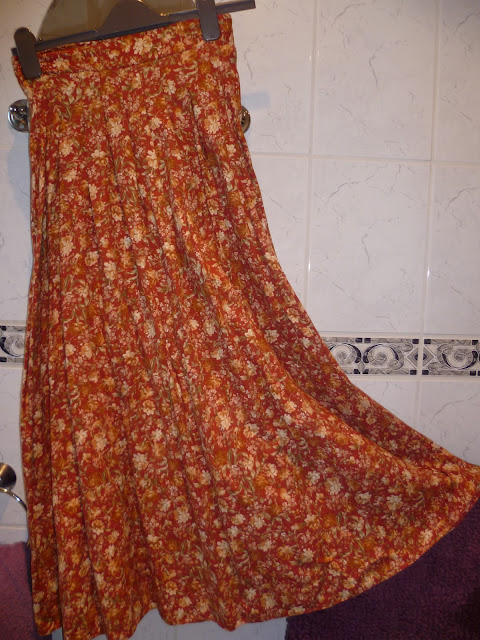 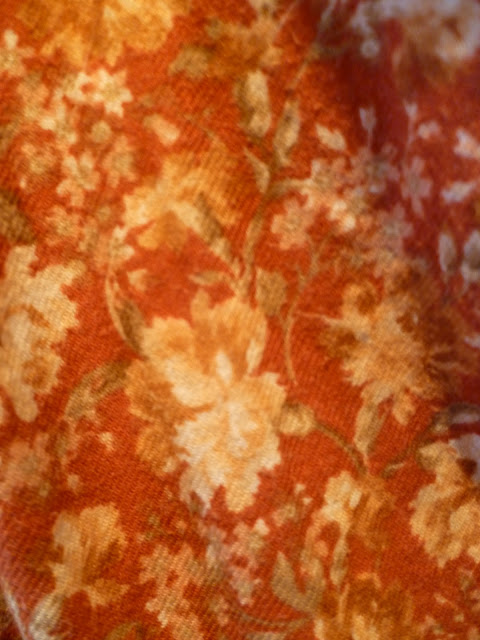 Once the rest of our friends had arrived, it was time to get ready. I had planned a very sophisticated outfit back in November of pencil skirt and black long sleeved blouse with roses and shoulder pads a go-go. I was thinking secretary meets Dynasty.  But then I gained weight and didn't like the way it looked the week before we were due to go. Damn my Toffifee munching!!

A quick peruse around Primark ensured that I looked suitably Eighties, and all for £15, including boots. I am loathe to buy things that I cannot use to make myself look 40's in some way or other, and I am pleased to say that although the boots are pixie-esque, with the right dress I think they will just about make the cross over. The top is universal, but the skirt went in the charity bag as soon as I got home. It was made of something hideous called "shell material". I am surprised I didn't shove a fag burn in it within 2 seconds. 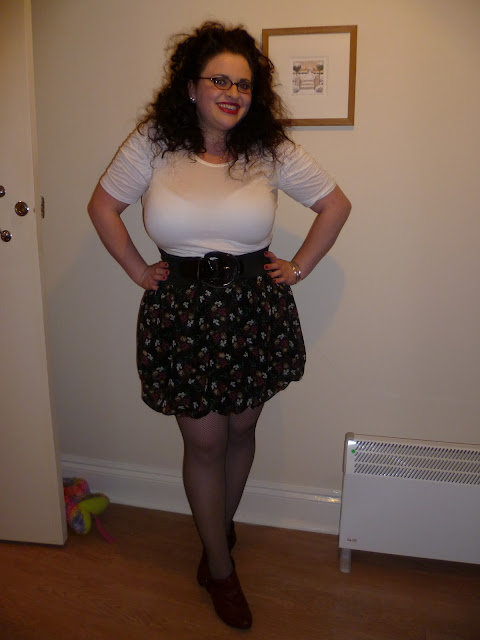 No.. I had not touched a plug with wet hands. This is the product of curled hair and back combing.
And the tights were fishnet -  not 15 denier as they look. Perish the thought. 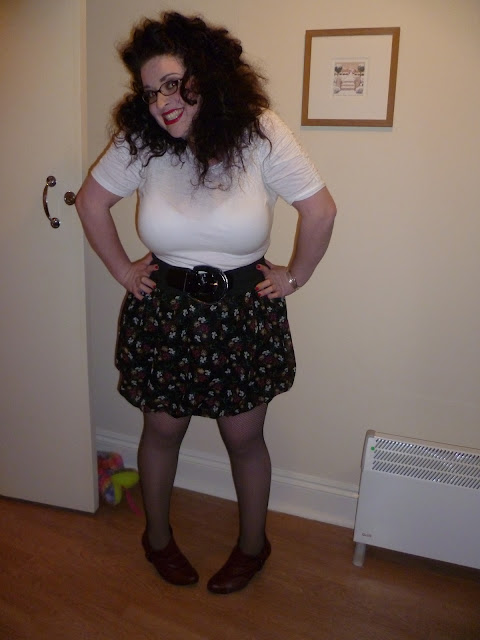 I am cheery here. I would not be when I had to recover my hair from all that back combing.
Lots of conditioner later and I was left with hair that would not hold a curl for a week. 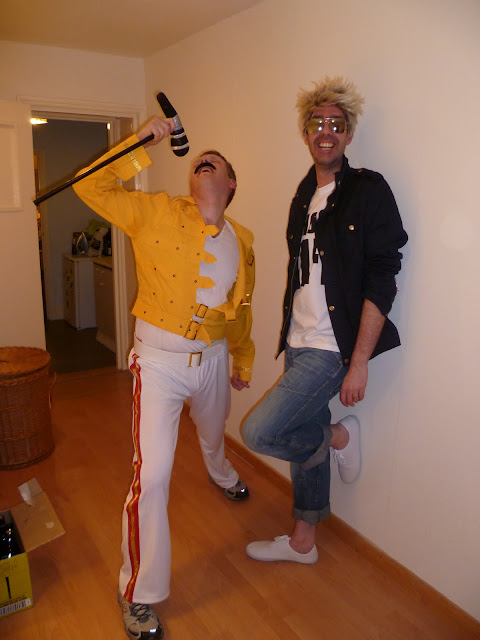 Camper than a row of tents. Freddie and George made a special guest appearance.

As did a certain Beard masquerading as Steven Tyler and Tommy Lee and Brian May all in one person! 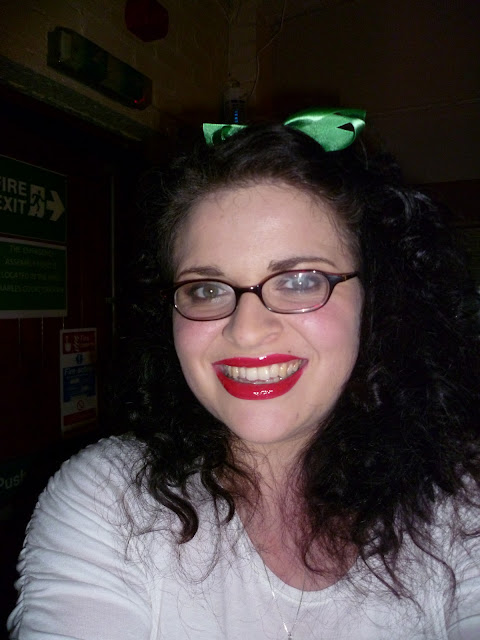 Complete with bow and a LOT of lip gloss. Which made smoking treacherous. 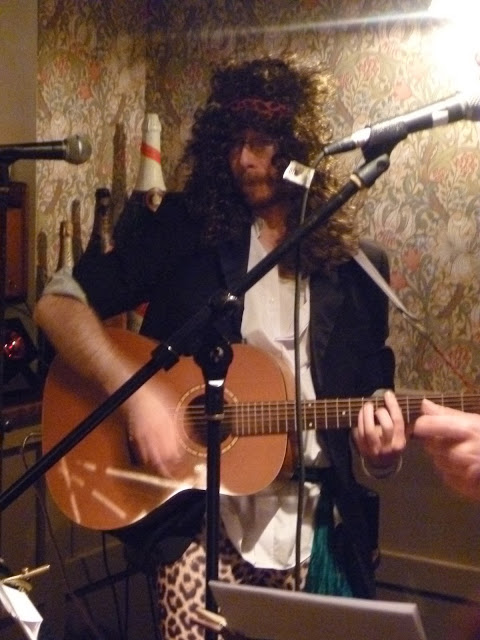 A Beard with a guitar is a happy Beard. 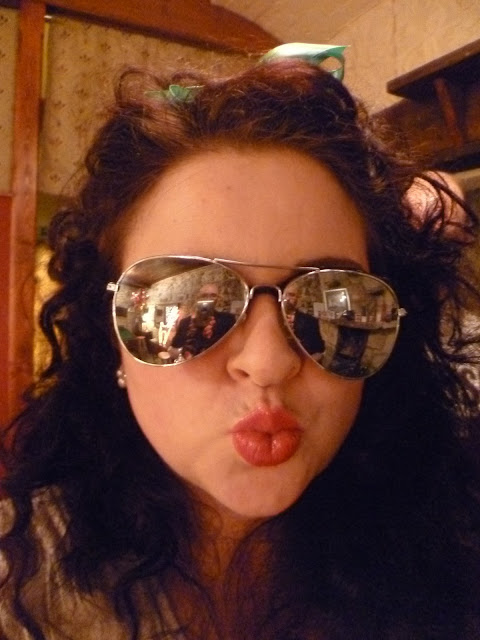 A drunken LandGirl in the 1980's needs aviators.

It was an excellent night full of acoustic classics such as Faith, Don't You Want Me, In between Days, Billie Jean, Turning Japanese, Echo Beach and That's Entertainment.
And so we rang and sang in 2011. And danced. And sang some more. And drank. ALOT of cider. We got to bed at about 3am. After I had decided to have a shower. I semi remember doing this. It involved some vague plan to remove my heavy eye makeup as I could not find the baby wipes. It took a while - but I felt alot better in the morning for not waking up a sweaty mess. 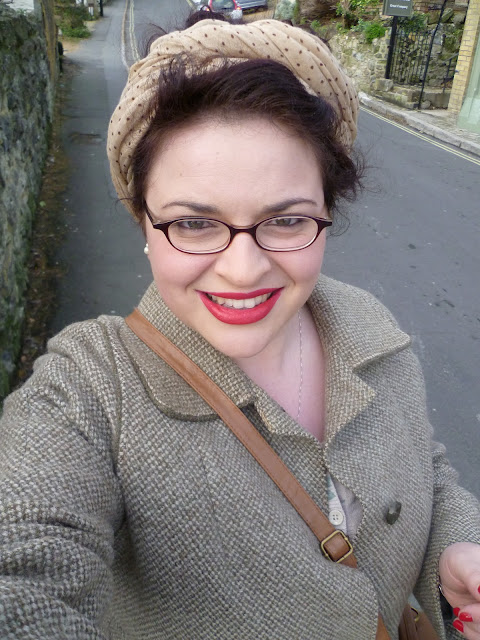 We headed down to the sea front to be greeted by police and alot of paps dotted about. And then my memory came back. We had heard o the grapevine of  New Yearness that a certain Mr Robert Pattinson was on the island. Not only that, but he was partying down the road. We all kind of went "hmmmm.. yeah... uh huh" (despite secretly squealing inside. Yes. I am firmly a member of Team Edward. Please don't leave my blog)  and drank on. I gave up all hope of catching a glimpse and became alot more interested in my egg and bacon sarnie. 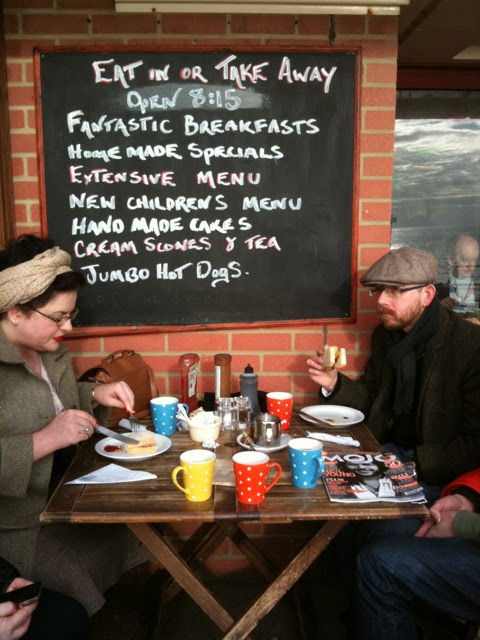 I should point out that I do not normally eat sandwiches with cutlery. The egg was particularly runny.

We finished the mini break with the pub to ourselves (see... there are those perks of being related to the owners again) and another late night. I am still not fully sleep recovered.

I hope all your NYE celebrations went with a bang instead of a whizz-phut and I wish you all the very bestest for 2011!