Hello and welcome to my venturing into Blog world. This is something that I have been pondering for a while and have finally stopped ponderment and decided to take the plunge! Please bear with me whilst I find me feets!
﻿
﻿ ﻿ ﻿But what better way to start than with a post about my recent visit to Aldwych Tube Station in good old London Town?  To commemerate the 70th anniversary of The Blitz and organized by the London Transport Museum ,this was a rare treat for anyone as the station has been closed to the public since 1994, only being opened occasionally. This is due to the health and safety police and quite rightly so as the only access to the tunnels below is via a spiral (and dizziness enducing) staircase.
﻿
Accompanied by good friends and a sense of wonderment, we ventured into the tunnels beneath. I did not know what to expect really. I have been dissapointed in the past by things that I have been so looking forward to - but I am pleased to say that this was brilliant!

We were greeted by an ARP Warden who throughly checked everyone for their gas masks and appropriate footware (there were some wonderful steel toe capped boots available for those who chose flip flops that morning) This was all fairly standard -  and then the air raid siren started. I don't think that noise, be it on TV, recording or real life, will ever fail to give me goose bumps and make me feel anxious. 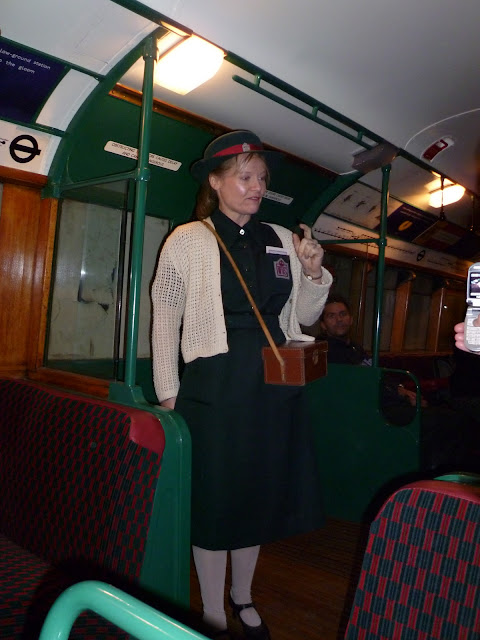 160 (ish) steps later, we were greeted by a vaaaary posh and friendly member of the WVS. She very graciously complimented me on my hat (I didn't tell her it was £1.50 from a recent charity shop rummage) and ushured us down to the platform.

I must confess that by this point I was feeling a little anxious. I believe that echos can be heard -  no matter how long ago. And I am as rational as the next person -  but the atmosphere down there was... overcrowded? Yes. It was dimly lit. Yes there were about 40 other people there. But, that aside, there was a palpable feeling. And it wasn't wholly unpleasent, but it had a definite anxiety to it.

We were invited to climb aboard the carriage and take a seat. Being used to the overcrowded, souless metal shuttles of today's Underground, this was a serene contrast. Wooden, slatted flooring and original seating made for a much more comfortable environment. Somewhere I would rather like to sit and embroider than the usual ipod on, book up and block out. 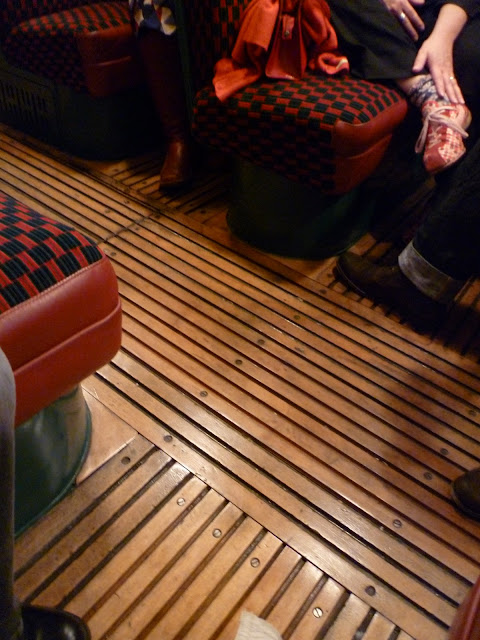 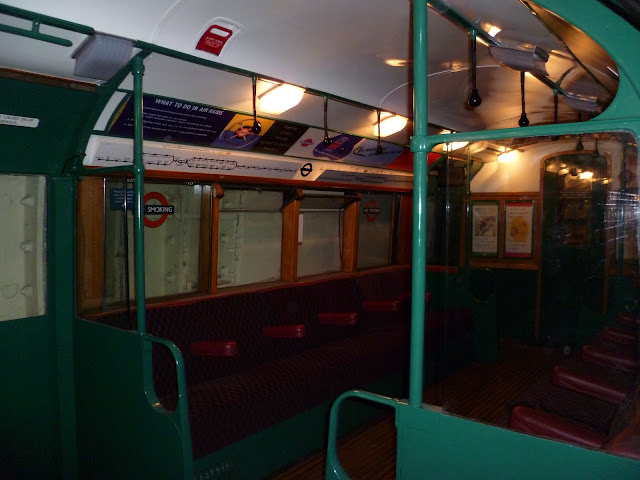 A quick walk along the platform and we were introduced to lady who I have dubbed "The Knitting Cockney" who really made the experience come alive for me. She did not have a function, unlike the WVS posh or the Spiv we
were to meet later on. She was just someone who was sheltering for the night. She gave us snippets of information whilst she chattered on  -  about what life was like for those who went to ground during the Blitz. 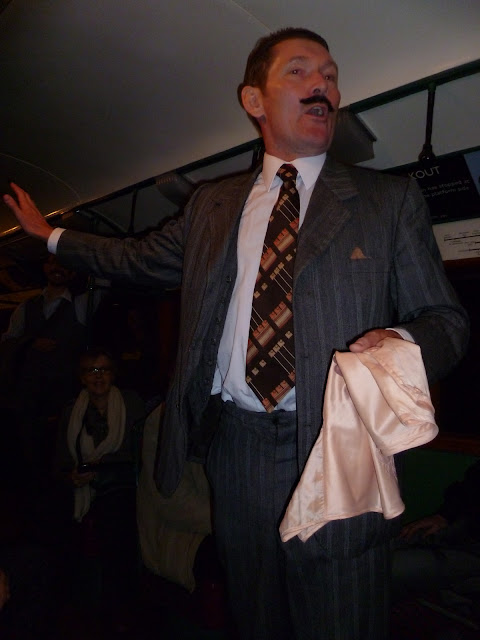 However, the best was yet to come when we met the official Spiv, complete with silk knickers and hose, and even some Al Bowlly tickets.

The "talking" part of the tour finished and as we were being escorted back up the platform, the air raid siren began to wail, the lights began to flash and the loud booms of bombs could be heard. I know that this was only a mock up, but it was enough to make me well up and really think about all my fellow Londoners who once shook and shivvered for their lives far beneath the city pavements. 10 seconds later and I was wholeheartedly sobbing. Thankfully no one could see me in the gloom, or hear me over a rendition of "Long way to Tipperary" and "We'll Meet Again" that was started by the tour guides.

Coming out to a sunny street and being greeted by a old Routemaster made me feel warm inside and proud of all things that are quintessentially British. 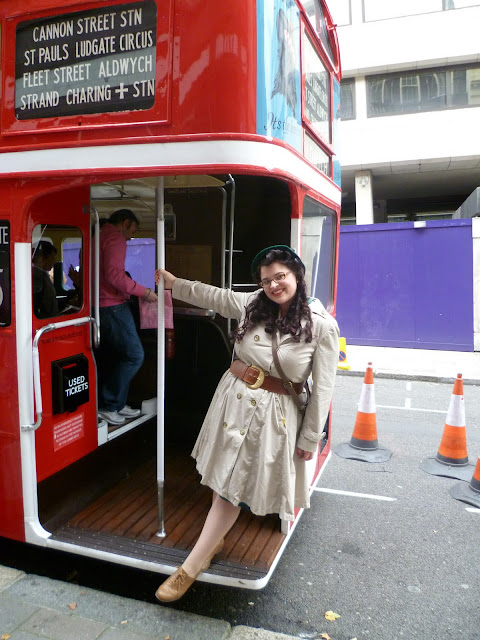 But - to be honest  -  I was glad to get out of there. The end of the tour left me feeling drained and shaken. Nothing in comparison to how the real shelterers must have felt. I , thankfully, got to come out knowing that I had a home to go to and that my family and friends were safe and well. And more than aware that many people who came out dazed and sleep deprived were not so fortunate.
Posted by LandGirl1980 at Sunday, September 26, 2010